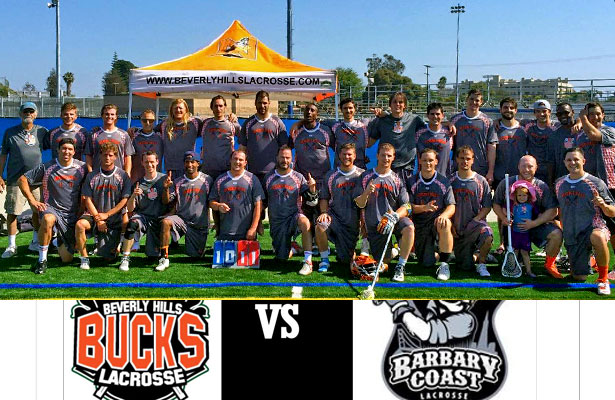 The Beverly Hills Bucks of the Southern California Lacrosse League (SCLAX), made up of 10 post-collegiate men’s teams from Los Angeles to San Diego, will play host to San Francisco club Barbary Coast for the state championship on Sunday.

Beverly Hills, which boasts a roster loaded with local high school coaches, defeated San Diego’s 40 Thieves 11-10 on June 21 with a goal in the closing seconds to win the SoCal title and advance to the state championship game.

In the SoCal title game against 40 Thieves, Livingston scored three goals and Maxwell two, but the game wasn’t decided until Nick Smith scored off a Cyle Moskowitz faceoff win with six seconds remaining. Beverly Hills (10-2) had lost to 40 Thieves 16-8 in a regular-season game back in March.

Barbary Coast also went 10-2 this season in winning the Northern California Lacrosse League title. The club’s roster lists players with credentials from the likes of Maryland, Penn, Georgetown and Cornell, among others.