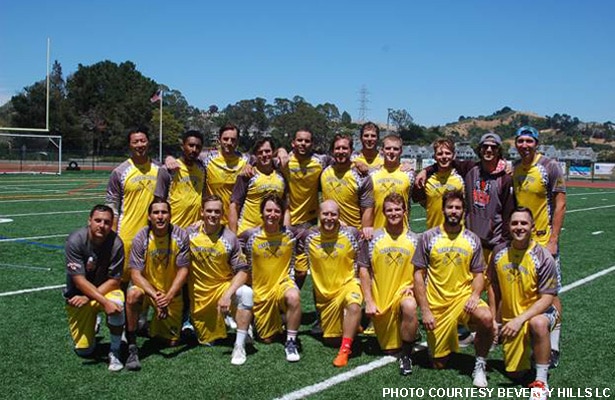 The post-collegiate men’s team from Beverly Hills Lacrosse Club won its second consecutive Southern California championship this season but also lost in the state championship game for the second year in a row, falling 8-7 in overtime to the Olympic Club of San Francisco on Sunday at Tamalpais High in Marin County.

Beverly Hills, made up of players with college pedigrees from D-I through MCLA, finished its season with a 10-3 record.

Hills scored first against Olympic and led 3-2 after one quarter, but Olympic scored three in a row to open the second quarter and take a 6-2 lead. De la Pena scored to break the run, and it was 6-3 at halftime.

Face-off man Smith, subbing for starter Cyle Moskowitz (Ferrum), who was unable to make the trip north, got the Hills’ comeback started with an over-the-head shot in traffic. Maxwell scored man-up to make it 6-5, and Livingston scored his second to tie the score 6-6 heading to the fourth.

Maxwell scored his second to give Hills its first lead since the opening goal. But the O-Club tied it, and the game went to overtime tied 7-7. Hills had a chance to end it quickly, winning the face-off to open the extra period, but a deflected shot led to an Olympic Club possession and, ultimately, the game-winner.

Hills advanced to the state title game with a 13-12 overtime victory over Beachcomber Lacrosse from San Diego in the SoCal title game. Conor O’Toole (Bowdoin) scored the game-winner in that one, his third of the game. Maxwell led Hills with four goals, Hill and de la Pena each scored two, and Sean Crane (Colorado) and Livingston each had one.