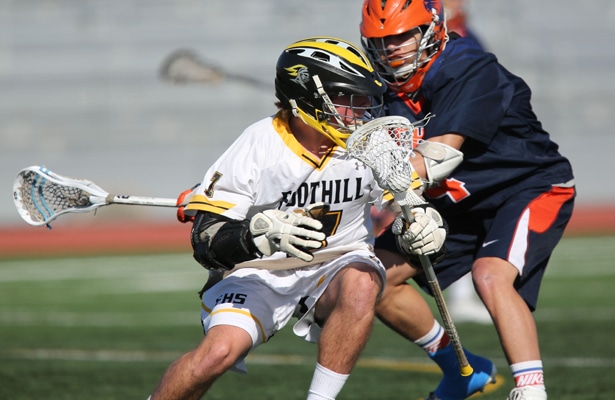 Foothill hosted  Bergen Catholic (NJ), the New Jersey state champions, at Irvine High School on Thursday.  The Crusaders, ranked no. 22 nationally, played with a fast, aggressive style of lacrosse that overwhelmed the Knights in the second half. A late four goal burst gave Foothill a 5-3 lead at halftime, but the Crusaders scored off the opening faceoff in the second half and just kept scoring to claim the 14-8 victory.

Kevin Kodzis wasted no time getting Foothill on the board, scoring an unassisted goal less than two minutes into the game.  That lead would hold up until the final two minutes of the quarter when Bergen Catholic ripped off three fast goals to make it 3-1 after 12 minutes of play.  The second quarter belonged to the Knights.  They held the the Crusaders scoreless and closed out the quarter with four goals in four minutes to make it 5-3 at halftime.  Matt Harris scored the first of his three goals at about the four minute mark.  Less than a minute later, Ellis Geis broke up a clearing attempt, picked up the groundball, and walked in all alone to score. That was followed by Kodzis’ second unassisted goal and Harris’ second goal (assisted by Cole Falbo),

Whatever momentum Foothill built up at halftime, evaporated during the intermission.  Duane Mattushik got the Crusaders going  about 90 seconds into the second half. Harris responded with a lefty snipe to complete his hat trick to make it 6-4.  Trevor Weingarten got it right back on the ensuing faceoff, and Mattushik and Shane Fable followed within a minute to make it 7-6.  Although Nathan Skeen was able to tie the game at 7-7, the flood gates were open.  Bergen Catholic outscored Foothill 7-1 the rest of the way to claim the 14-8 victory.  Skeen scored the final Foothill goal with an assist from Kodzis.

Harris’ hat trick led the Knights. Kodzis (2g, 1a), Skeen (2g), Geis (1g, 1a), and Falbo (1a) also tallied points for the Knights.  Ryan Blank kept the game from getting out of hand with several of the on-the-crease saves that he has made seem routine this season.

Next up: Foothill (9-2) plays Mt. St. Joseph’s of Maryland (7-2) on Saturday and then heads to the Bay Area next week.  Bergen Catholic plays La Costa Canyon on Saturday before heading back to the east coast.