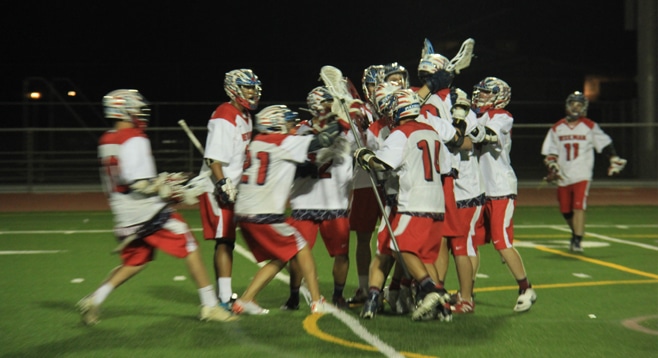 The Beckman Patriots upset Corona del Mar Friday night in a 48 minute battle between the lines. Even with CdM and Beckman without important anchors on defense in Hugh Crance (CdM) and Tanner Culley (Beckman), the intensity never dipped for a second.

Things didn’t start well for the Patriots as they went man down for an illegal substitution after the opening face off. This directly led to CdM goal by Sherwin Gersten and an early 1-0 lead for the Sea Kings. Both teams battled battle for the next four minutes until Ben Palitz put CdM up by two and left some of the Beckman fans scratching their heads. Nick White wouldn’t let Beckman go scoreless in the first and buried a shot with four to play. Stephen Von Der Ahe answered and gave the Sea Kings the 3-1 lead at the end of the first.

With both teams warmed up and settled into the pace of the game, the physicality was turned up a notch. Wesley Filipak opened up the scoring for the Patriots and it was clear that Beckman was ready to fight for the win. It became increasingly evident that Beckman would have to own possessions and ground balls as Sea King face-off maestro Jason Simaan was winning everything at the faceoff X, going 16/21 through the game. The Sea Kings couldn’t cash in on the possessions generated in the second quarter by Simaan thanks to save after save by Matt Allen. Much better clearing by Allen and the Patriots (which was a problem against Tesoro) let Alex Malmlund, Filipak and Alex Knox (twice) add goals and momentum to the Beckman side as they rolled into the second half up 6-3.

In the second half, Simaan kept winning faceoffs but shooting accuracy and bad luck became the story of CdM’s inability to catch Beckman hitting multiple posts on shots that should have been goals. They were able to generate offense and buried three goals (Brett Greenlee, Palitz and Gersten)in an effort to close the gap. CdM was unable to gain any ground in the third when Beckman’s Alex Knox and Trevor Keene generated offense with Keene scoring two goals, each clutch and the second coming in the last seconds of the third.

Beckman’s resilience on gb’s and smart offense creating long possessions with minimal unforced turnovers was key in the fourth to enable the Patriots to hold off the CdM pressure. Howe and Palitz struck early in the fourth and cut the deficit to one mid way through the fourth. Allen then shut it down for the next seven minutes with the help from the posts and Filipak cashed in again to make it 10-8 with four minutes to play. Shot after shot never found the back of the net for CdM until Palitz scored with 17 seconds to go. There are few face-off middies in the county than Simaan for this situation and in desperate need for a faceoff win and possible fast break goal. However Jake Waltz won the faceoff and carried into Beckman territory, pushed out of bounds but taking enough time off the clock to only allow an inbounds Hail Mary from the Sea Kings with 4 seconds to go. The deep ball chucked towards the goal would go untouched as Beckman completed the upset, 10-9.

Coach Brendan Finnerty on what the win means for Beckman: “These guys work so hard and it’s a huge win for the program and this senior class. They earned it.”

Stars of the Game:
1. Alex Knox, Beckman, middie: The senior middie continues to impress and gave Beckman the lift they needed during their second quarter run. He ended the game with a hat trick and assist but his contributions in this game go further than those stats.

2. Ben Palitz, Corona del Mar, attack: Palitz had six points (4g, 2a) in his attempt to put the team on his back and win the game for the Sea Kings. He is a complete attackman and when Jordan Greenhall returns from an injury the duo will cause problems for everyone they face.

3. Matt Allen, Beckman, goalie: Allen cleaned up his clearing game from the match against Tesoro and it paid dividends. Allen is solid in the cage and collected 10 saves even with his best defenseman out.