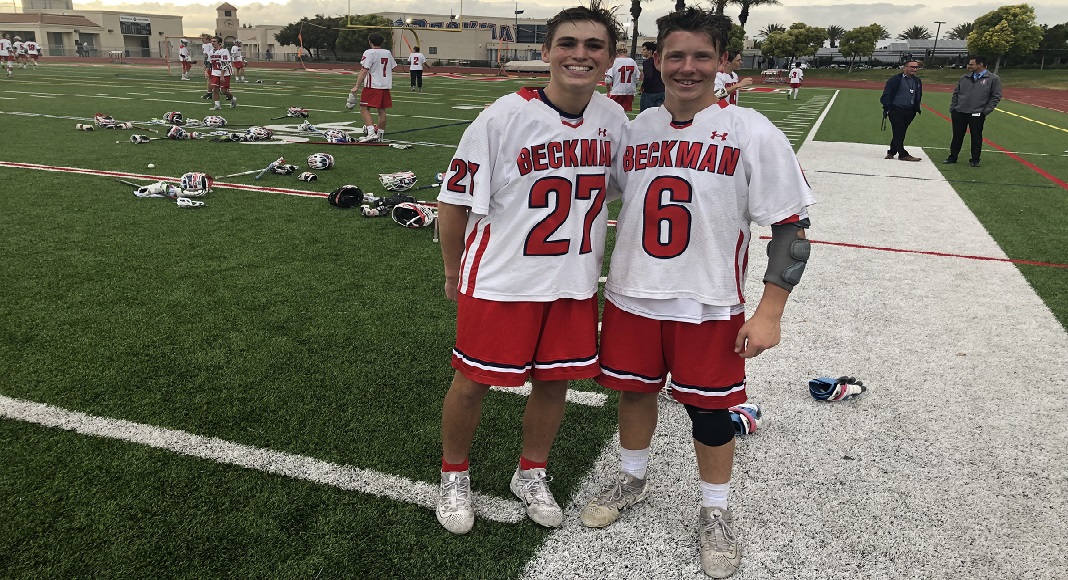 The No. 18 Beckman boys lacrosse team defeated No. 16 Edison 13-7 on Monday at Beckman High School in a play-in game to determine who would meet St. Margaret’s in the first of OC/IE Championship Tournament.  The Patriots will play the top-seed Tartans today at 4:30.

“I care a lot about these kids and they worked hard all offseason long. Coming into a new system, they did a good job of staying with it all season long and now it’s starting to pay off,” Patriots coach Cameron Cole said.

Edison held an early 2-1 advantage until the Patriots rattled off two straight goals to take a 3-2 lead at the 3:16 mark courtesy of Wilson. Dom Rehak  tied the game at 3-3 17 seconds later, but the Patriots took the lead for good when Casey Finley scored from a pass from Jason Cheng with 10 seconds remaining in the first quarter giving the Patriots a 4-3 lead.

“We knew they were a defensive team. We knew it was going to be a tough physical battle from the start and it was all game. Offensively, we possessed the ball really well and that kind of gave us the edge,” Cole said.

Beckman led 8-3 after goals from Gavin Dankert and Wilson until Tyler Timmins (4 goals) scored for Edison, ending a drought that lasted 22:12 from the first quarter. Wilson and Cheng added a goals after that to give the Patriots a 10-4 lead heading into the final quarter.

After Texter scored his third goal of the game, Edison tried to make one last push, as Jackson Miller and Timmins scored goals to cut Beckman’s lead down to 11-6. But the Chargers got no closer, as the Patriots continued to dominate offensive possession and used the clock to their advantage.

Finley, Cheng and Dankert each had two goals while Morgan Puliafico made seven saves for the Patriots, the Pacific Coast League champion.

Miller, Rehak and Lorenzo Perdomo each chipped in one goal for Edison (10-8), the fourth place team out of the Sunset League. Matt LaFerrier and Hunter Whalen made three and two saves for the Chargers.

“I think everyone’s figured out our M.O., and that we can score quickly, we have a lot of great transition game, so if they can hold the ball, how can we score? That’s what all the good teams have done to us this year,” Chargers coach Dieter Nemes said.

Edison was making its first playoff appearance in team history. Despite losing, Nemes was proud of how his team stuck with it until the end.

“No one ever quit. I look forward to improving. We made the playoffs in history of the program, now let’s take a step from there and beyond,” Nemes said. “We’ve helped turn the corner a little bit. We [the Edison coaches] have an attitude and culture in mind.”