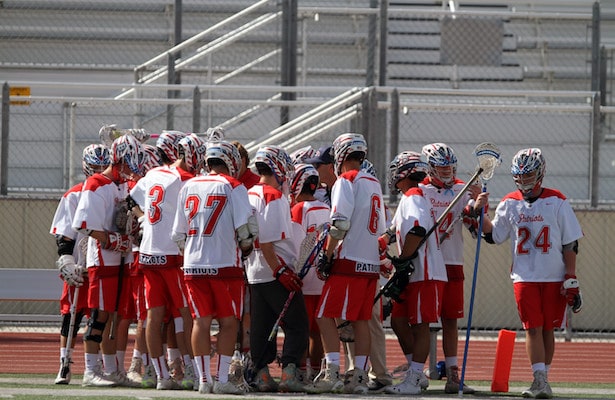 Beckman High School took control of the Patriot League race by defeating Northwood 11-4 in a home game on Monday.  The two teams entered the game tied for first place with 4-0 records, giving the Timberwolves hopes of slowing down Beckman’s pursuit of a fourth consecutive Patriot League crown.  However, the combination of Max Cody’s faceoff domination (unofficially 14/17) and too many Northwood turnovers allowed Beckman to dominate possession and cruise to their 35th straight PCL win.  The Patriots have not lost a league game since April 25, 2012.

The chief beneficiaries of all those possessions were Kyle Seiler (4g) and Jack Bilello (3g).  Dean Nagle found the back of the net twice. Alex Watson and Zack Carter each scored once. A solid team defensive performance by the Patriots provided goalie Tyler Schweickert (6 saves) with a relatively quiet afternoon that included this beauty:

Michael Bellas and Jason Venezia each scored two goals for the Timberwolves. Goalie Marcus Redman (13 saves) and his defense performed admirably despite being under pressure throughout most of the game