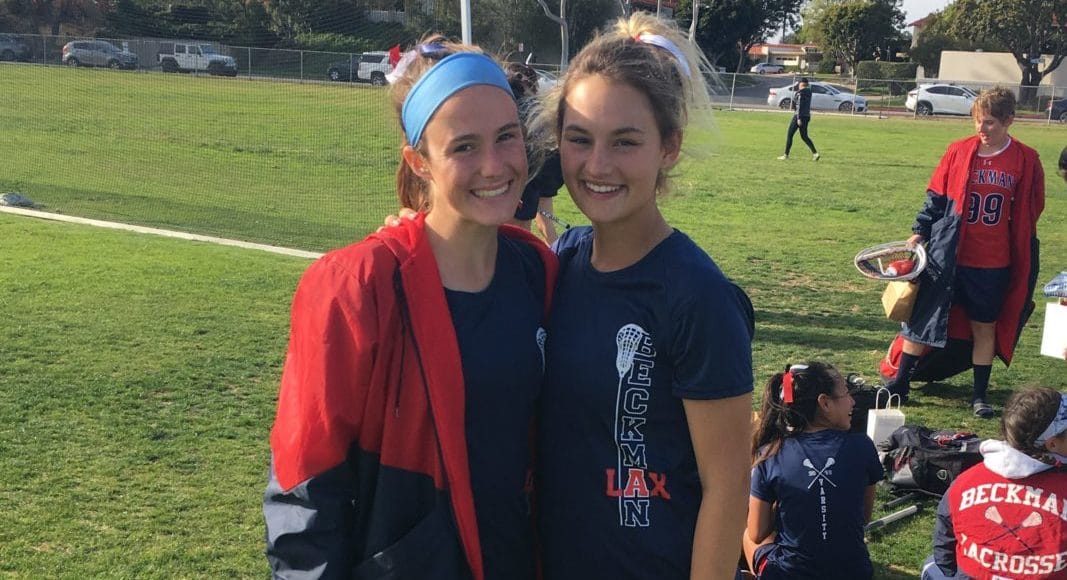 Newport Beach – The Beckman girls’ lacrosse team, aka the cardiac queens, held off Pacific Coast League rivals Corona Del Mar 7-6 on Monday at Corona Del Mar High School.   The game marked the third straight time and fifth time in seven outings that the Patriots have been involved in a one-goal game.

“It took the girls being resilient and not trapping their heads and getting too anxious when things weren’t going their way. They [Beckman] knew coming in this is a huge rivalry, it has been for years ad it wasn’t going to be easy. They just kept battling,” Beckman coach Tim Duchene said.

Beckman was led by Taylor Stern who had four goals and one assist while Carly Tobias had two goals and two assists. Nidhi Satyadev also scored a goal for the Patriots, which got four saves from Maddy Wolf.

The Patriots got off to a fast start scoring the first three goals of the contest. The Sea Queens were held scoreless for almost 21 minutes, until Joslyn Simaan them on the board. CdM closed out the quarter with two more goals to go into halftime tied at 3-3.

The Patriots jumped out to a 5-3 lead in the second half and eventually led 7-5 until the Sea Queens scored to make it 7-6 with 9:41 left to play. Following a Tim Duchene, the Patriots were successful in running down the clock and keep the Sea Queens off the board.

In the waning seconds of the half, Sea queens goalie Ashley Olson made a save and tried to get it to her teammates up the field. But time ran out before they could do so.

“I think the defense was huge. Without our defense, a lot of our shots didn’t go in the first place, so without them, that game would’ve been theirs,” Tobias said.

Simaan led the Sea Queens with three goals while Ellery Amdor had two goals. Caroline Brewster added a goal for the Sea Queens, which got 10 saves from Olson.

“I don’t think anything specifically went wrong. I think we were actually playing a pretty competitively good game. We were winning draws, we had great goalie saves and we’re finishing our shots. It’s just a matter of getting the [win] next time,” Sea Queens coach Aly Simons said.

The two teams will meet on Wednesday April 11 at 4 p.m. There maybe a lot riding on that game.   The Patriots finished second in the PCL to CdM last year, and the two rivals are favorites to compete for the league championship, and head-to-head competition may be the deciding factor.

Duchene, though, isn’t looking that far ahead, as his team’s next game is Wednesday at home against Irvine at 4 p.m.

“We worry more about the way we play than what everyone else is doing. We need to keep working and do the things that we can do right and then everything will take care of itself,” Duchene said.

The Sea Queens (0-4, 0-1) will look to win their first game of the season on Wednesday when play at University, which went into Monday at 4-0, at 4 p.m. This is a busy week for the Sea Queens, as not only do they have their two league games, but they also play rival Newport Harbor on Friday at 4:45 p.m.

“I think every game we’re improving, even though we’re not getting the W’s. The score is showing, we’re playing collectively as a team and the vibes are very good on the sideline. I just think being consistent in practice and showing up and improving in games will lead to those wins,” Simons said.