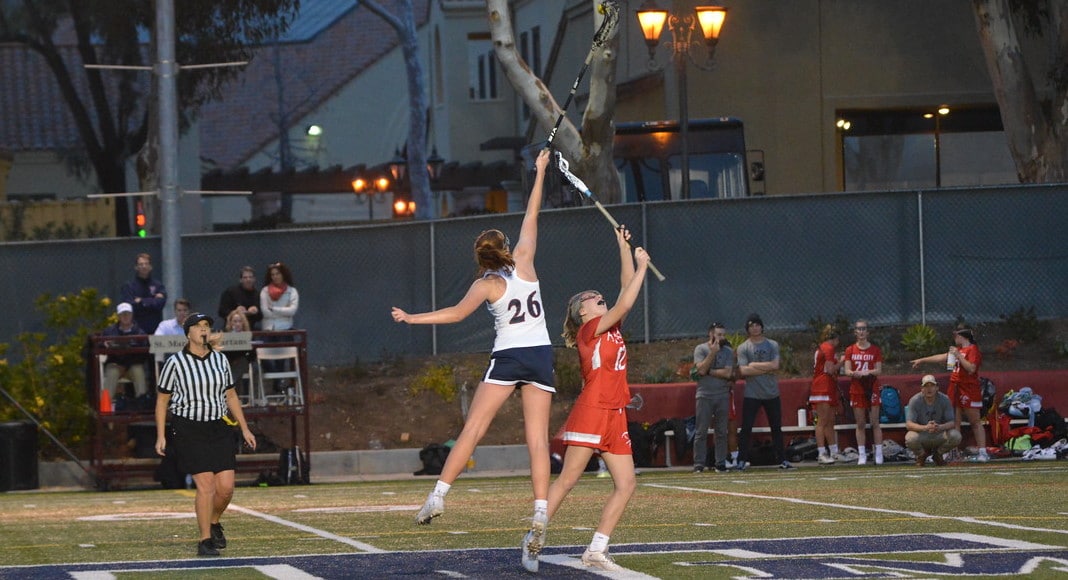 Maddie Barkate came up big with four goals and three assists to help the No. 1 St. Margaret’s Tartans pull away from the No. 8 Beckman Patriots 12-6. Although the Patriots were able to narrow the gap to two goals midway through the second half, St. Margaret’s stuck to their game plan, kept their nose to the grindstone, and earned the comfortable victory with five unanswered goals to close the game.

For a contest between two prolific goal-scoring teams, the game opened at a slow pace. The Tartans built their first-half lead from a foundation of lights-out defense; Beckman would not score until 22 minutes into the game. St. Margaret’s was operating with an offensive unit disrupted by a missing Campbell Case.

Coach Holly Reilly noted that Case’s absence put players were in new roles, which had ripple effects through the offense, particularly with respect to timing.  Still, St. Margaret’s was able to build a five-goal halftime lead, 7-2.

The second half gave Beckman a tantalizing glance at a potential upset, as they came out and scored three straight over the first ten minutes. Reilly was impressed with her team “really getting after ground balls,” but acknowledged that they “lost a little momentum in the second, made a couple mistakes.” They worked to shrug off the Beckman run and never got too nervous.

Although they had a little trouble syncing up until midway through the second, once they did get their timing down, it was lights out for Beckman. The Tartans finished with five unanswered goals and advanced to the semifinal for the second year in a row.

Although the visiting Patriots were a “team [that] never quit” and “never said never,” according to Coach Tim Duchene, St. Margaret’s had the edge on the hustle stats throughout: ground balls, caused turnovers, and draw wins—which the Tartans dominated, 16-4.

St. Margaret’s will face Trabuco Hills in the OC Semifinal.