Babb goes off at Under Armour Regionals 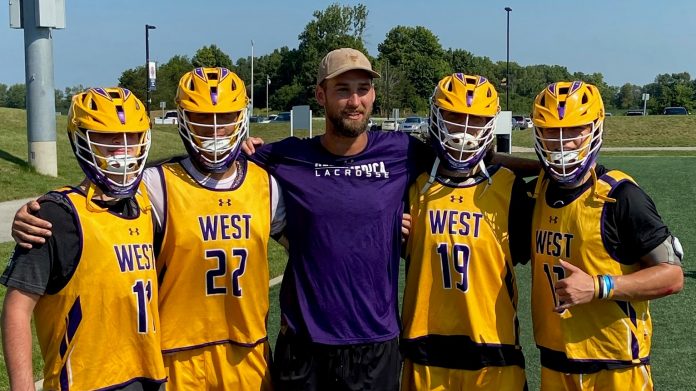 Foothill High School rising senior Easton Babb put on a show at the recent Under Armour regionals in Indiana. The 6’3″ 205-pounder went off for 10 points (7g, 3a) in five games to finish as the leading scorer for his team.

Babb was not the only Southern California player to impress at the event.  While he was lighting up the scoreboard at one end of the field, a pair of Servite Friar ’21 defenders, Nick Shermetta and Bryton Hickok, helped to lock things down at the other end.

Shermetta and Hickock continue Coach Tom O’Leary’s tradition of nasty poles who can D up and lead up-tempo transition.  Most notable was the tandem of Hayden Rodenbeck and Jack Seals in 2018.  Rodenbeck played in the Under Armour game and Seals played for the west in the Brine National All Star game.

Look for Shermetta and Hickok to be a factor in OC lacrosse in 20-21 for Servite.  Seals and Rodenbeck combined for 21 goals as seniors and it’s likely this combo will do similar numbers for the uptempo Servite team.  Shermetta started on fire this season posting big games against Corona del Mar and Yorba Linda, he’ll only get better.  He’s played plenty of wide out in football and he has lots of of speed. I doubt there’s many faster in OC at any position.  Hickok is super quick laterally and can provide on-ball pressure, expect him to cause turnovers.

For the 23 class a pair of lefty poles should do well.  Jake Tom from Loyola HS is extremely polished for a younger player, very high lacrosse IQ and throws hard accurate checks.  Always plays hard. One to watch.  Zack Harden of Foothill should break out in 21 season for the Knights, and it wouldn’t be surprising if the started that this weekend.  He can D up 1-1 and has worked on his transition game and strength this summer.  Has the motor to dominate a game.

Shown in the picture from left to right are Hickok, Baab, Coach Cooper, Anthony Careiri of Orange Lutheran and Sheremetta.