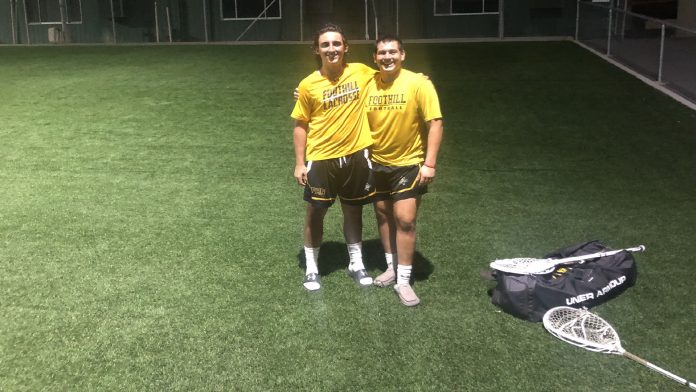 “I thought we played well as a team. We pressed hard on defense and just controlled the ball early in the game, so that was big for our team just playing offensively together and taking care of the ball,” Knights coach Jon Fox said.

The Knights never trailed and led by as much as 5-0 midway through the second quarter. Freshman Bode Jellerson (2g) showed why the Knights can be so difficult to defend with this first quarter beauty:

The Sea Kings finally got on the board with two straight goals at the 5:27 and 3:42 mark to make the game 5-2. Reese Boyd (1g) scored a little over two minutes later, as he caught a pass from Kenny Seiler (1g) to make it 6-2, which became the halftime score.

Foothill kept up the pressure early Q3 with Seiler scoring only 51 seconds after the faceoff to push Foothill’s lead up 7-2. CdM didn’t get down on itself and with Lucas Newton winning faceoffs and Ty Caffarelli providing the offensive spark quickly got back in the game. Cafferelli scored a minute after Seiler’s and then assisted on a Shawn Fromme goal to cut the lead down to 7-4. Five minutes after Fromme’s goal, Gavin Gossen scored and just like that the Foothill lead was cut to 7-5.

“Lucas did a great job of controlling the ball and we didn’t support him well enough from the wings to earn the actual possession of the faceoff and that hurt us. We played a lot of defense and it’s tough to get an offense going when you don’t have the ball,” Sea Kings coach G.W. Mix said.

Luke Fox (2g) stopped the bleeding at the 2:59 mark of the third quarter to gave the Knights an 8-5 lead going into the final frame. From there, Foothill kept CdM off the scoreboard the rest of the way, as Garcia made key saves down the stretch, with two coming from back-to-back shots.

“This game is just about momentum, hustle and going for it. CdM has players that do that just like Foothill,” Jon Fox said. “We just had to settle down and get the ball down to offense and hold it. We were just rushing because they get excited.”

Caffarelli led the CdM with two goals while Frome, Gossen and Ben Holton each had one goal. Wyatt Rieden made four saves for the Sea Kings.

“We spotted them five goals, they’re a good team and you can’t give them a five goal lead and it took us awhile to adjust to the speed and intensity of the game and we’ve got a lot of first time guys out there in big games and it showed tonight,” Mix said.