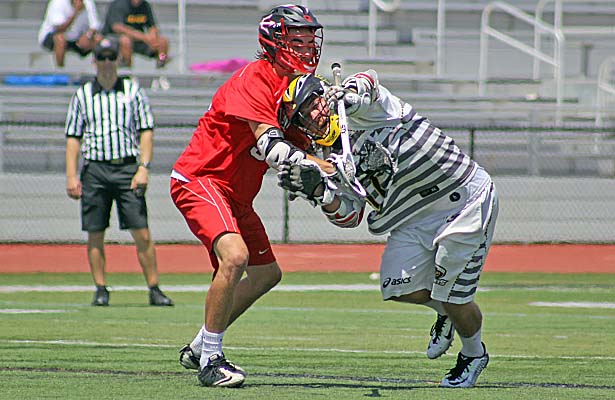 Head coach AJ Stevens struck gold last week when he landed Foothill High School senior Austin Babb as the first recruit inOttawa University history.  Babb, one of the elite face-off middies in Orange County, will be pinching, popping, and picking up ground balls for Steevens and the OU Braves in the fall.  He dominated the face-off X last season with a 70% win percentage while playing against some of the best competition California has to offer, and was a vital part of Foothill’s championship run. Babb has 17 career goals and has already scooped up 330 ground balls as he enters his fourth year as a member of the Foothill varsity.

Coach Stevens was clearly happy with his first commitment, saying “We could not be more excited to have Austin Babb as the first recruit in program history.  Austin has consistently showed his ability to take over games at the face off x and we believe he will make an immediate impact at Ottawa University  “Coach Fox is one of the most respected prep coaches on the West Coast.  We look forward to creating a strong pipeline of Foothill recruits as we build our program.”

Foothill coach Jon Fox, talked about the quality of Babb’s character. “Austin is a terrific young man with a unique personality and tremendous sense of humor.  Some traits that describe Austin are: loyalty,  toughness, and empathetic. He has the ability to deal with continued adversity, and the strength to keep battling when the chips are down.  He will be a great start for Coach Stevens and the new program at Ottawa University. My expectations are for him to be leading the team to the NAIA national championships shortly and graduating with a quality 4 year degree.  I think Austin is ready for Kansas, but is Kansas ready for that nasty flow and unwaivering toe drag?”