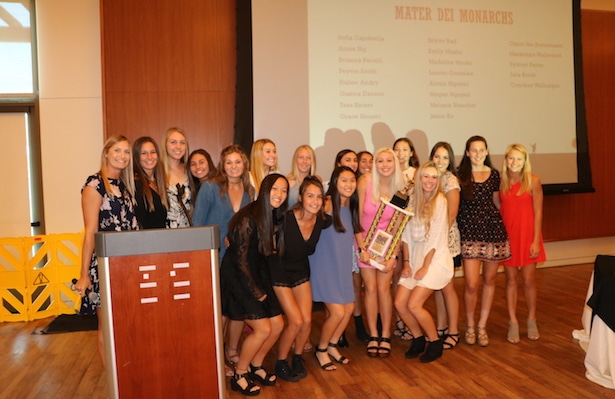 The Mater Dei girls lacrosse team (pictured above), the undefeated 2016 Southern Section Champions, were among the many honored at Orange County Chapter of US Lacrosse banquet last week.   A full house of 250 athletes, parents, coaches and officials attended the event at the Bell Tower in Rancho Santa Margarita.  Grace Houser, a rising senior on Southern Section champion Mater Dei Monarchs and a First Team All County Selection said  “We have so many talented players in Orange County, it was great to see both girls and boys from the lacrosse community come together in one place. Thanks to the Board and everyone else for their hard work in putting on the  Awards Banquet.”

In addition to  the Mater Dei girls lacrosse team, US Lacrosse also honored the Corona del Mar boys’ lacrosse team for their Orange County championship and all the 2016  girls’ lacrosse award winners  and boys’ lacrosse award winners, including Jason Simaan, the Boys’ Lacrosse Player of the Year, and Hannah Upshaw, the Girls’ Lacrosse Player of the Year.  One of the highlights of the evening was Upshaw’s speech after receiving her award from her coach Kate Hick.  The momentum was captured in the following video:

In an open letter to the lacrosse community, chapter President John Fischbeck said “Tonight was a proud moment for me seeing our boys and girls together in one location. The season is such a whirlwind of activity and we don’t often get a chance to share in each others accomplishments, however based on tonight’s success I look forward to seeing the USL awards banquet become a longstanding tradition into the future.”

This event would not have happened without the tireless efforts of the US Lacrosse Board and other volunteers.  Fischbeck specifically thanked OC US Lacrosse Girls Area Chair, Holly Reilly for coordinating the event, and parent volunteer Lisa Young for her” tireless efforts of planning and executing this wonderful event.” Fischbeck also acknowledged the efforts of Marissa Young who graced the check-in table and Olivia Young who was responsible for all of the great photos to document the award winners.

MaxLaxOC.com asks our readers to join us in thanking Mr. Fischbeck and the entire Board of Directors for their efforts in making 2016 another successful and fun-filled season. The importance of their commitment and service throughout the year cannot be overstated.