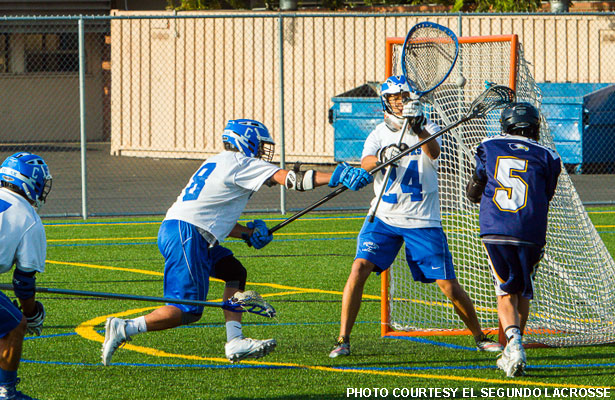 With three attackmen combining to score 14 goals Wednesday, No. 20 El Segundo ran away with an 18-7 victory over host No. 18 Culver City in an Ocean League game that reportedly got quite chippy down the stretch. It was the sixth consecutive win for El Segundo and fifth in a row scoring 15 or more.

Senior Preston Quashnick (6g, 1a), junior Cory Lund (5g, 4a) and freshman Lukas Roscoe (3g), pictured, led the Eagles to a 5-3 lead after one quarter and a 9-3 advantage at halftime. Seven of the Eagles’ first-half goals came from the three attacks.

“Our attack is pretty much working on all cylinders right now, so it’s pick your poison,” said Brooks Roscoe, El Segundo coach, via email.

The Eagles (7-4, 4-0) stretched their lead to 16-6 entering the fourth quarter, and that’s when things started to get ugly. The Centaurs (6-4, 3-1) were called for six penalties in the final 12 minutes. In order: Unsportsmanlike; illegal body check; crosscheck; illegal body check; crosscheck; unsportsmanlike. The last one came with 1:05 to play, and the game was called at that point.

In the early going, the game seemed to be nothing more than the latest edition of what is becoming a fierce Ocean League rivalry. Last season, El Segundo’s first in the league, the Eagles swept two games from the Centaurs, including a 12-11 win in the last game of the regular season to clinch the league title. The year before, with El Segundo not a league member, Culver City went 6-0 and won the Ocean.

The Eagles were credited with 47 ground balls in the game. Junior middie Daniel Ball (3g, 3a) had nine, and senior LSM/D Drew Bonney had seven. Ball was credited with four clears and Bonney six.