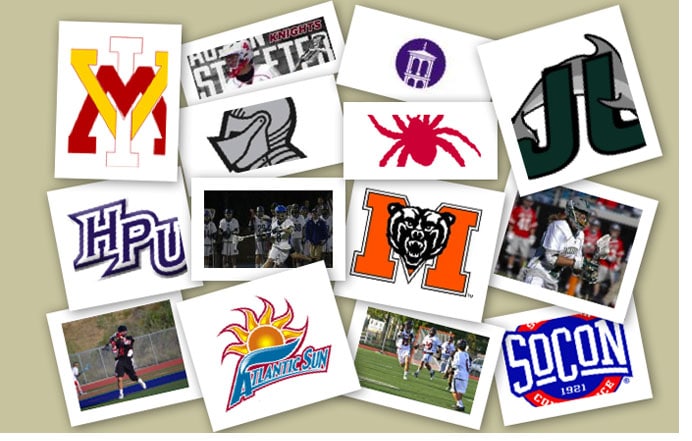 The moderate climate of the southeast, southern hospitality, and the opportunity to play Division 1 lacrosse have proven to be an irresistible attraction to many Orange County lacrosse players. Dakota Rohlin (Great Oaks High School) is a sophomore at Jacksonville University, Garrett Parsons (Santa Margarita Catholic High School) is a freshman at Mercer University in Macon, Georgia, and high school seniors Peyton Garrett (San Clemente High School), Austin Streeter (San Clemente), and Tucker Guyot (JSerra Catholic High School) are all headed to the south next fall. Garrett will play at High Point University in North Carolina, Streeter will play at Bellarmine University in Kentucky, and Guyot will team up with Rohlin at Jacksonville.

Jacksonville, Mercer, and High Point will compete in the inaugural season of Atlantic Sun Conference lacrosse this spring along with Virginia Military Institute, Furman University, and Richmond University. Bellarmine will join these six teams in league play but there will be a twist. The A-Sun and the Southern Conference announced in a joint press conference that the SoCOn will assume stewardship of men’s lacrosse from the Atlantic Sun in 2014-15, making it the SoCon’s 20th varsity sport. Hence this season will be the A-Sun’s first and only lacrosse season. A total of 11 colleges are currently members of the SoCon: Furman, Chattanooga, Western Carolina, Davidson, Georgia Southern, University of North Carolina Greensboro, Wofford, Elon, Appalachian State, the Citadel, and Samford. Of these 11 members only Furman currently has a Division 1 lacrosse program. Does the transition from the A-Sun to the SoCon mean additional growth is planned for D1 lacrosse, opening more doors for OC players? We can only speculate at this time.

The text from the joint press release follows:

SPARTANBURG, S.C. – Utilizing a cooperative approach that has already proven beneficial in another sport, the Atlantic Sun Conference and Southern Conference have reached a joint agreement designed to support the regional growth in men’s and women’s lacrosse.

Under the new agreement, the Southern Conference will assume stewardship of men’s lacrosse from the Atlantic Sun in 2014-15, making it the SoCon’s 20th varsity sport. The A-Sun will continue to sponsor women’s lacrosse, with programs in both conferences having automatic access to participation opportunities in either sport.

This marks the second initiative in which the conferences will be partners, as the A-Sun and SoCon are also linked in the administration of the Coastal Collegiate Swimming Association (CCSA).

The growth of lacrosse throughout the Southeast led to the Atlantic Sun Conference beginning sponsorship of women’s lacrosse last year, earning an automatic bid for its champion in its first season. A-Sun women’s lacrosse has six members this season (Detroit, Elon, Howard, Jacksonville, Kennesaw State, Stetson) and will have eight for 2014-15 with Elon departing and Furman, Mercer and Old Dominion joining the roster.

The launch of women’s lacrosse also led to the investigation of beginning a new men’s lacrosse league. Based on the initiative and interest of the schools sponsoring lacrosse on the men’s side, A-Sun men’s lacrosse debuts this season with six participants (Furman, High Point, Jacksonville, Mercer, Richmond, VMI) competing for an automatic bid. Bellarmine University, an NCAA Division II school in Louisville, Ky., that has competed at the Division I level in men’s lacrosse since the program’s inaugural season of 2005, will join the group in the SoCon for the 2014-15 season.

The SoCon and A-Sun, in conjunction with the Big South and Mid-Eastern Athletic conferences, already collaborate in the administration of the CCSA, a 15-member NCAA conference formed in 2007 to provide championship opportunities in men’s and women’s swimming and diving programs.

“This arrangement will ensure that new lacrosse programs, men and women, will have a conference home that includes an automatic bid to the NCAAs and a regional conference schedule that makes sense,” Southern Conference Commissioner John Iamarino said. “We are grateful for the spirit of cooperation from the A-Sun and all its men’s lacrosse programs. Our objective is to build upon the foundation they’ve established to grow the sport on these campuses.”

“We strongly believe that the student-athletes, the athletic programs currently sponsoring and those investigating sponsoring men’s and women’s lacrosse, and the institutions those teams represent are all served very well in this partnership,” Atlantic Sun Conference Commissioner Ted Gumbart said.

“The collaborative effort in building a new automatic bid opportunity for both women’s and men’s lacrosse-playing members has been outstanding and we look forward to working together with the Southern Conference towards continued growth in sponsorship and competitive opportunities for all the institutions in our leagues.”

The Southern Conference, in its 93rd season of intercollegiate competition, is a national leader in emphasizing the development of the student-athlete and helping build lifelong leaders and role models. The conference has been on the forefront of innovation and originality in developing creative solutions to address issues facing intercollegiate athletics. From establishing the first conference basketball tournament (1921) to tackling the issues of freshman eligibility (1922) to developing women’s championships (1984) to becoming the first conference to install the 3-point goal in basketball (1980), the Southern Conference has been a pioneer. The Southern Conference is the nation’s fifth-oldest NCAA Division I collegiate athletic association.

The conference currently consists of 11 members in five states throughout the Southeast and sponsors 19 varsity sports and championships that produce participants for NCAA Division I Championships.

The Atlantic Sun Conference is an NCAA Division I league with 10 member institutions committed to Building Winners for Life. The A-Sun meets the challenge of maintaining the highest standards in academic and athletic achievement with a true balance between student and athlete. Headquartered in Macon, Ga., the A-Sun footprint reaches into seven of the top eight media markets in the Southeast.

The A-Sun continues to be an innovative leader in promoting university and student-athlete interests by broadening opportunities. Along with playing a primary role in the creation of the CCSA and coordinating the launch of A-Sun women’s and men’s lacrosse, the A-Sun became the first conference in the country to sponsor sand volleyball when it conducted its inaugural championship in spring of 2012.