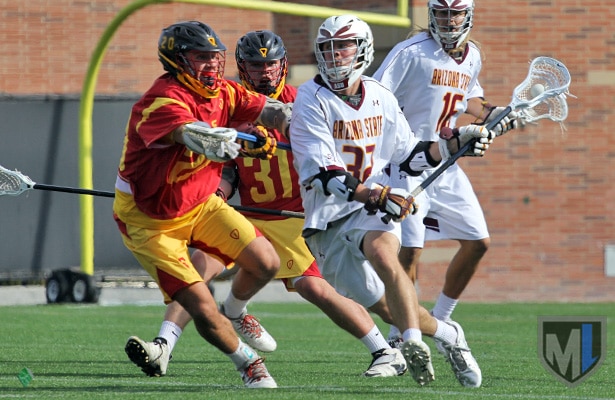 No. 5 Arizona State, No. 11 Arizona and host UCLA all went 2-0 over the weekend at the annual Pac 12 Challenge MCLA event in Westwood. USC won its opener on Saturday but fell to the Sun Devils 11-4 on Sunday.

The Sun Devils (2-0) opened the weekend with a 10-7 win over Oregon State, jumping out to a 502 lead after one quarter and closing with a 3-1 edge in the fourth quarter.

The Arizona Wildcats improved to 3-0 on the season with a 9-3 win over UC Berkeley on Saturday and a 9-0 win over Utah on Sunday. Midfielder Christian Turri and attack Jeff Howard each scored three against the Bears. Foothill alum Ryan Falbo had a goal and an assist. In the shutout of Utah, seven different players scored for the Wildcats, who blew open a 2-0 halftime lead with a six-goal third quarter.

After opening its season 0-2 with losses to San Diego State and Concordia, UCLA (2-2) finally got into the win column with a 13-12 win over Washington on Saturday. The Bruins led 8-3 at halftime and held off a late Huskies rally for the one-goal win. Sunday, UCLA had no trouble with an overmatched Washington State team, winning 16-1. The Cougars, who had only 14 players dressed on Sunday, were playing their third game in three days.

USC (2-2) took advantage of the undermanned Cougars on Saturday, posting a 20-0 victory, but the Trojans ran into trouble Sunday against ASU.