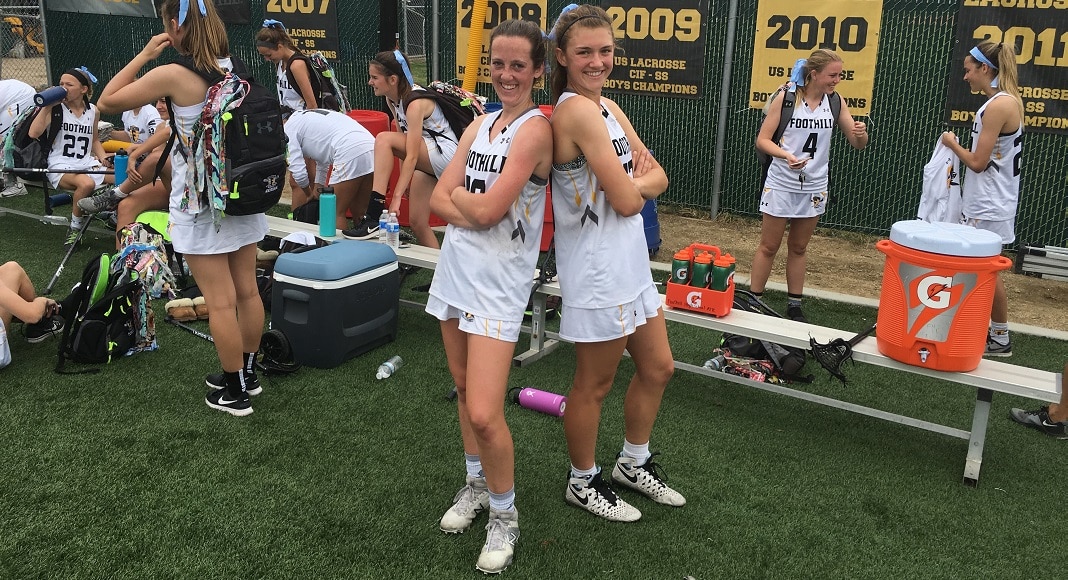 Ashley Stokes scored five goals and Ava Brand added four more to lead the No.2 Foothill girls lacrosse team to a 12-8 victory over an aggressive and determined No.13 Newport Harbor squad on Saturday morning at Foothill High School.

The win was the sixth in a row for the Knights but this one did not follow the same form as the previous five.  Whereas Foothill has been winning by an average margin of 11 goals per game since falling to San Clemente in mid-March, the Sailors stood toe to toe with the Knights until midway into the fourth quarter.  It was not until Foothill scored four unanswered goals in the final 10 minutes that this game was really settled.

“I think we were playing just a little to frenetic and then we started to calm down and we found a weakness and it worked,” Foothill coach Kate Hick said. “I was incredibly impressed with [Newport Harbor’s] aggressiveness playing. I feel they like they definitely came to play. They wanted to win. They were extremely aggressive off the draw circle and I think they gave it to us on the defensive end.”

It was a game of runs in the first half, as the Sailors scored the first two goals of the game. The Knights didn’t get their first goal until the 19:26 mark, but that proved to be the spark the Knights needed, as they scored three straight goals after the first goal, and went ahead 4-2 forcing the Sailors into a timeout.

The Sailors answered back by scoring four straight goals of their own and led 6-4 with about 1:30 left in the first half. That proved to be enough time for the Knights, as they scored two straight pivotal goals and went into halftime tied at 6-6 and not trailing.

Foothill made its adjustments at halftime, as it scored the first two goals half only to see the Sailors answer with two straight goals of their own, tying the game at 8-8, forcing Hick to take a timeout at the 10:05 mark of the second half.

The timeout came at a perfect time for the Knights, as they shut out Newport Harbor for the remainder of the game, while scoring four goals of their own to seal the deal.

Credit the Sailors too for holding leading scorer Brooke Williams to one goal, well below her season average of five per game.  But Stokes and Brand stepped up with their combined nine goals to show that the Knights have more than one weapon at their disposal.

“That’s what I love about our offense. We’re not just about Brooke Williams. We’ve got Ava [Brand], we’ve got [Ashley] Stokes, we’ve got people that can take over when they need to,” Hick said.

Lauren Kilger scored the other two Foothill goals, who also got seven saves from Becca Nailon.

For Newport Harbor, Delaney Knipp led the way with three goals while Joelle Rothbard and Caroline Farley had two goals apiece. Ella Kenney added a goal for the Sailors while Willa Rath made seven saves. Newport Harbor coach Brooke Martini said she was proud of her team and how they fought hard against Foothill.

“I think this game we all worked together as a unit and everything was really clicking. I think we can take everything away from this game. We stayed strong and from here on out, we’re just going to keep pushing,” Martini said.

Previous articlePoway Falls to LA No. 1 Loyola, 11-9
Next articleOak Park Runs Away from Thacher in Second Half
MaxLaxAll Lacrosse. All the Time.
Southern Section Boys