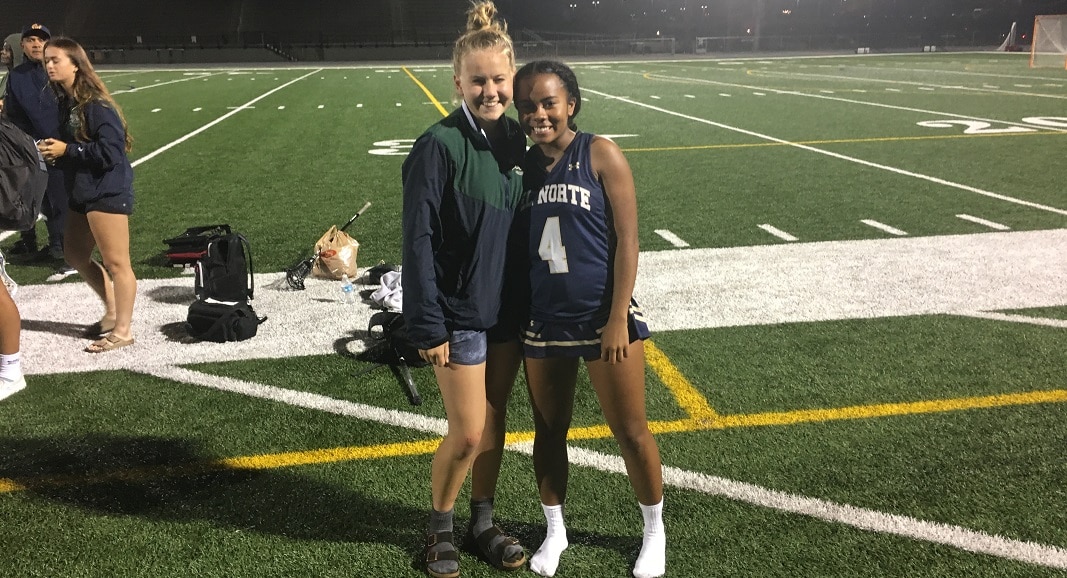 After traveling 85 miles from San Diego to Newport Beach, the Del Norte girls lacrosse team found itself going overtime with No.13 Newport Harbor. In the end, the team was all smiles after the game, as the Nighthawks edged Newport Harbor 14-13 on Monday at Newport Harbor High.

The Sailors led 9-4 with 2:14 in the first half, but was whistled for a yellow card, leaving the Sailors a player short. While Newport Harbor was shorthanded, the Nighthawks took advantage of the situation and scored three goals, going into halftime only down 9-7.

The Nighthawks evened the game at 9-9 in the second half only to have to Sailors retake the lead. The two teams found themselves tied at 11-11, but the Sailors led 13-11 at one point.

After the Nighthawks scored a goal with 5:19 left in regulation, the Sailors got the ball on the next play and started running down the clock. The strategy worked for about four minutes but with less than a minute left, the Sailors tried to add an insurance goal, and turned over the ball instead. That sequence of events led to Anderson tying the game on a free position shot with about 30 seconds left in regulation.

In overtime, the Nighthawks won the draw control and eventually got the ball to Evans, who found Anderson for the game-winning goal, allowing the guest Nighthawk players to storm the field after playing lacrosse for almost two hours. After the game, the two teams enjoyed a well deserved meal together.

In addition to Anderson and Evans’ scoring output, the Nighthawks got contributions from Marielle Marin (2 Gs) and Makena Lincoln (1 G). Del Norte, which improved to 4-4 on the season, also got 11 saves from Audrey Do.

“I think one thing it came down to was making silly fouls. We fouled for no reason, we got angry because we were losing the ball. It came down to our fouls,” Newport Harbor coach Brooke Martini said. “I think we gave it our all and put our 110% effort out there. And we know in the upcoming games to focus on body and not focus on stick.”

The Sailors (4-9) have’t had it so easy, as they have now lost four straight games and are now 2-4 in games that are decided by one goal and 1-3 in games that go into overtime. They also went into the game without Caroline Farley, who injured herself on Saturday’s game at Foothill. According to Martini, she said Farley should be back at the end of the week.

“I think it comes to when we are up by a couple goals, it comes down to possession and really taking care of that ball and taking our time and not rushing it,” Martini said.

Del Norte will enjoy the rest of its spring break until Monday, when it plays Westview at home at 7:30 p.m. Newport Harbor will look to end its four-game losing streak, as they play Yorba Linda at home tonight at 6:30 p.m.

Previous articleNailon Leaving a Legacy at Foothill
Next article2018 Coaches Poll Debuts With St. Margaret’s at No. 1
MaxLaxAll Lacrosse. All the Time.
Southern Section Boys