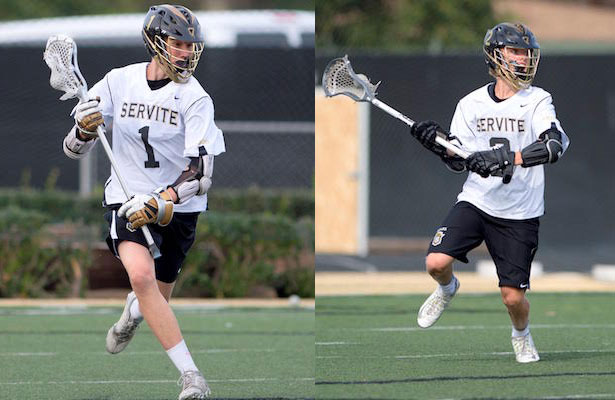 Servite senior attacks Kyle Cartwright and Chase Anderson are the offensive Players of the Week.  Thanks in large part to the efforts of Cartwright and Anderson, the Friars racked up 54 points in three games last week and beat two higher-ranked teams (JSerra and Beckman).   Anderson (11 goals, assists) and Cartwright (10 goals, 7 assists) accounted for more than 1/3 of their teams goals.

Servite coach Tom O’Leary says told MaxLaxOC.com: “Two senior captains who have each personally had strong games.  Recently it has been a 1-2 combo with both young men simultaneously producing together.  We refer to their playing style as And-1 lacrosse here at Servite.  While both can be a threat to the cage, they understand that engaging the defense and finding the open man is more important.  We Before Me.
These two young men have dedicated their time to not only push personally boundaries, but competing with each other and raising the level of competition among teammates as well.  Two great examples of friendship and the brotherhood shared here at Servite. “