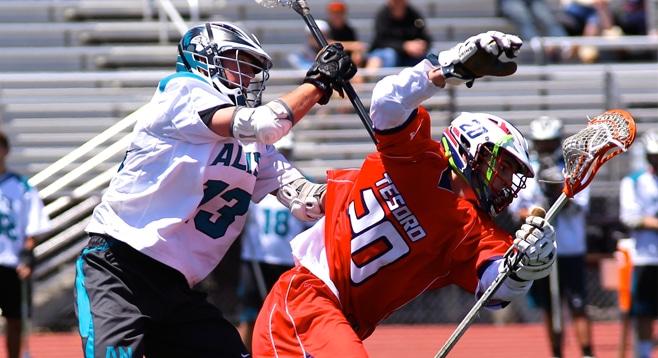 Aliso Niguel viewed Saturday’s game with Tesoro High School as an opportunity to prove that it is time for the OC lacrosse community to cast aside doubts about the Wolverine’s low strength of schedule, and accept the Wolverines as a legitimate Top 10 team. With this chip on their collective shoulder, Aliso Niguel came out Saturday afternoon firing against one of the top goalkeepers in the OC, Tesoro junior Gunner Garn. Garn was in peak form as he defended his cage against the barrage, and rejected several point blank shots to keep his team close in as the first quarter ended in a 4-4 tie.

The second quarter saw Tesoro seize control, as the pace of the game settled down into one more to Tesoro’s liking, and take a 6-5 lead into halftime. The Wolverines were able to make some halftime adjusts and get the scored knotted up at 7-7 heading into the 4th. Tesoro scored first to take an 8-7 lead but with Titans weakened by a depleted bench, and the Aliso defense locking down, the Wolverines scored the final two goals of the games and celebrated a hard earned 9-8 victory.

Senior middie Matt Costanzo did all he could with 3 goals and 1 assist.

Senior Attack Sage DeVault was able to squeeze out 2 goals and an assist while being closely guarded by Aliso’s do everything defensive specialist senior d-pole Conner Reed.

-Senior middies Stevie Barron and James Murphy (two assists as well) each had two goals  apiece, with Barron scoring what ended up being the game winner.

-The aggressive Aliso defense of Conner Reed, Cole Latimore, Parsa Zarinsefat, and Senior d-pole Sawyer Hulse caused many turnovers to prevent the Tesoro from getting into a rhythym. Hulse led the charge with four forced turnovers.

Tesoro will travel to Trabuco Hills to complete their regular season schedule on Tuesday.