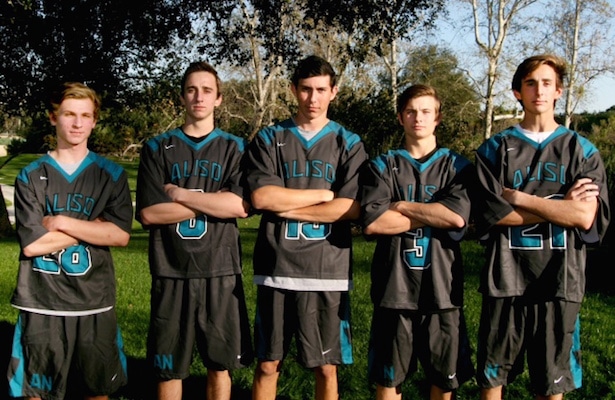 The Aliso Niguel High School Wolverines are on a roll after a Thursday night come from behind 12-11 win versus a strong Los Alamitos High School team and a convincing 13-6 win over Servite High School on Saturday. In addition to the record setting heat, the Wolverines started the game short handed while All County attack Jonah Rinaldi and starting defenseman Nick Hatalski finished their SAT testing during the first quarter of the game.

Not to worry as ANHS’s “Young Blood” were ready for the challenge. Juniors Jake Lombardo and Jerry Traub scored early goals and Lombardo finished with an awesome line of three goals, five assists and four groundballs. Wolverine’s feisty d-middies gave the Friars fits all game as both Junior Reese Wong and Freshman Tyler Jones caused multiple turnovers while battling to keep the ball out of their net.

Rinaldi made the most of his three quarters, earning himself a “Hat” by scoring three  goals. His Senior buddy Matt “The Man” Jones followed his four goal game (including the game winner) vs. Los Al with two more goals on Saturday. These two old guys had help once again from some “Young Blood” as Rinaldi’s SAT partner Junior Nick Hatalski and Sophomore Colin Mandichak were nails against the potent Friar offense.

The Wolverines will barely have time to hydrate after Saturday’s scorcher before they go to battle against three ranked teams: March 20th vs. Great Oak, 24th vs. Tesoro and 27th vs. Trabuco. ANHS will need great efforts from both their experienced upper classmen and their strong up-and-coming “Young Guns” if they are to come out of the next 3 games with “W”’s. Stay tuned!