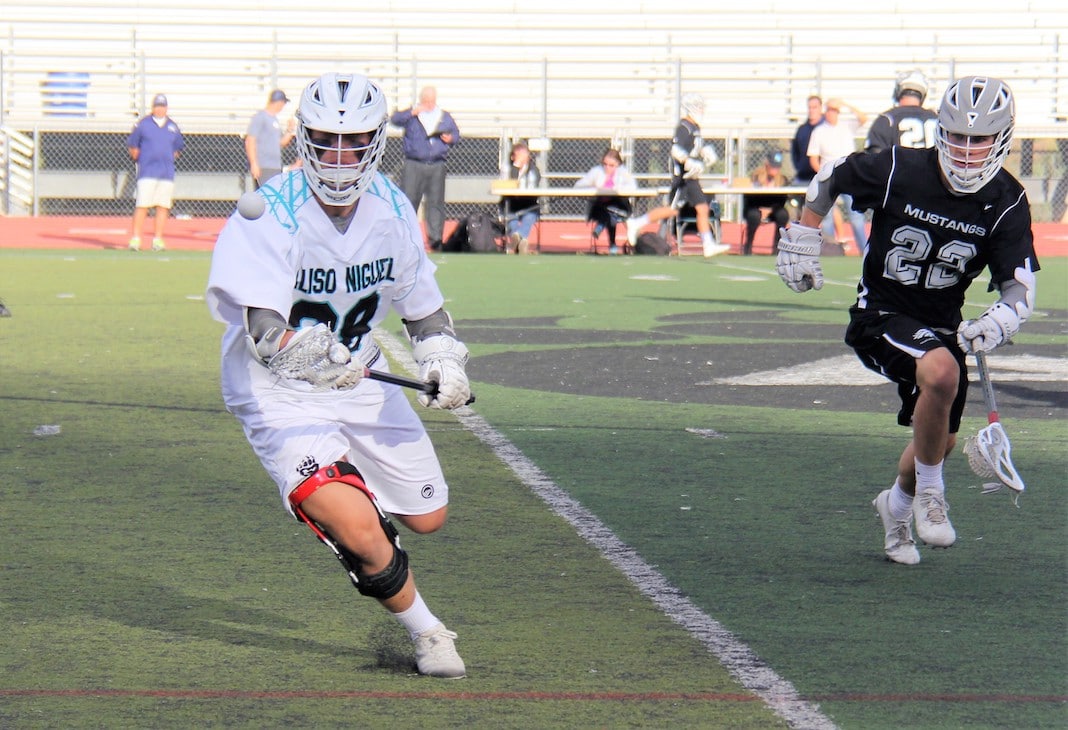 Barely four years after playing his first lacrosse game, Aliso Niguel senior Brice Beimer has decided to play at the next level for MCLA powerhouse Arizona State. Beimer did not start playing lacrosse until his freshman year in high school, but fell in love with it quickly and was playing varsity just one year later.

Beimer says that he always wanted to try lacrosse, but did not find an opening in his baseball schedule until he go to high school.

“I wanted to try lacrosse but I was a baseball player so the seasons didn’t work,” said Beimer by email. “I decided to try lacrosse in high school while playing club baseball. I picked up a stick, put down my bat and never looked back!”

In addition to being attracted to the fast pace and physical aspects of lacrosse, Beimer was exposed to quality athletes at Alison Niguel like Michael Marino who motivated and mentored him.  He then began to realize that lacrosse could be his ticket to being a college athlete.

“I was messing around with our varsity faceoff (specialist) Michael Marino (CMU ’19/NCAA D2) at a preseason tournament and knew then I wanted to be a faceoff middie,” Beimer remembered. “I always wanted to be a collegiate athlete, just didn’t know it was going to be in lacrosse. I trained all summer and during football season trying to make the varsity lacrosse team my sophomore year, which I did. I believed then that if I continued to work and train hard I had a chance of being recruited.”

Beimer says that he considered some quality NCAA programs like Ithaca College, Salisbury, and Colorado Mesa but ultimately decided ASU was the right fit for him.

(ASU is) “a great university with a top 10 MCLA Division 1 program who was recruiting a faceoff specialist and Coach MacRobbie wanted me'” Beimer said. “Ultimately decided I wanted to be closer to home and go to a “big football” school.”

Aliso Niguel coach Zach Henderson has watched Beimer’s competitive nature fuel his growth and benefit the Wolverines over the last several years.  Henderson is confident that MacRobbie has found a winner.

“The entire coaching staff and Wolverine lacrosse program could not be more proud and excited for Brice,” Henderson said, “and his commitment to play at Arizona State University. Brice is an absolute gamer — no matter the circumstance, situation, or score, Brice steps onto the field with every intention to put his team in a better position moving forward. Brice has consistently improved his specialty of faceoffs, while also putting in extra emphasis on his overall lacrosse game. He may very well be the one of the most competitive people/players we have ever had within our program, and I firmly believe his leadership and guidance will assist the younger guys into elevating the program as a whole.”

“Without a doubt, Brice will find great success during his career at ASU. Knowing the type of person Brice is, he will do everything in his power to contribute towards the overall team goals of the program. We are extremely excited to see how Brice will make an impact at the next level, while simultaneously working towards obtaining his degree.”