Aliso Niguel Lacrosse Continues To Be a Family Affair 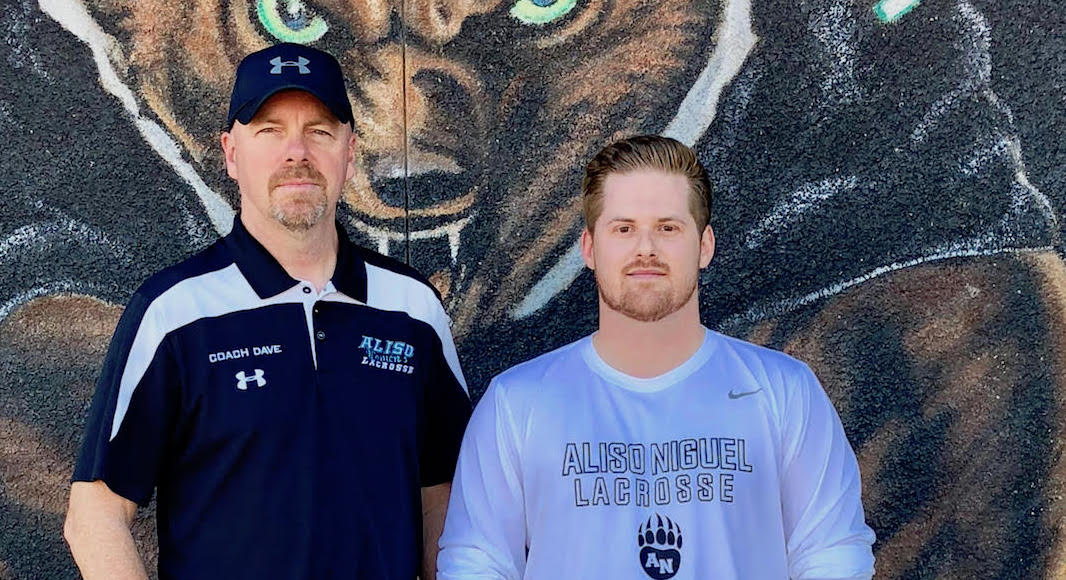 It’s no secret that the lacrosse community in general is extremely close-knit. In South Orange County, though, Aliso Niguel lacrosse continues to take that concept to new heights.

Dave Elkins started the Wolverines’ girls lacrosse program in 2008 and will enter his 11th season as head coach next month. At the same time, Elkins’ stepson Zach Henderson, a Wolverines’ alum who played on the school’s first club team in 2007, will enter his first season as head coach of the Aliso Niguel boys lacrosse program.

Henderson has been an assistant in the Wolverines’ program since he graduated high school, most recently serving as head coach of the JV Black squad. In September, he was named head coach, the program’s fourth head varsity coach in as many seasons.

Despite the family’s deep roots in the Aliso Niguel lacrosse programs — Elkins’ daughters Emily and Molly played there, and his wife has served on the board — the school’s new principal was unaware when Henderson applied for the varsity boys’ position that the school’s veteran varsity girls’ coach was his stepfather.

“She was relatively new,” Elkins said. “and Zach was an assistant walk-on coach, so we kind of kept it under wraps. I’ve always believed you get what you earn, and I wanted him to get the job on his own merits, so we went ahead and let it roll.”

When the principal found out — after Henderson had accepted the position — he said she was thrilled to know the young coach had a mentor at home who also had close ties to the school. “She’s extremely happy that I’m an alum, too,” he said, “because we’d prefer to keep the Aliso family close-knit.”

The Wolverines are coming off a 7-10 season, the second season in a row in which they didn’t make the playoffs after having reached the second round in 2015. Henderson hopes to bring Aliso back to that level.

“Unfortunately, it has been a revolving door of head coaches,” Henderson said, “We had a nice run there for a few years, even reaching the second round of the playoffs. But the last two seasons, we’ve fallen short, whether that’s inconsistency from the top in the head coaching position or just having new guys in the program. But we’re hoping to change that. Now that I’ve taken over as head coach, I want to establish that consistency.”

To find an example of consistency, he need look no further than across the dinner table at Elkins. Henderson lived at home while attending Cal-State Fullerton and then completing his work on a teaching credential, so he’s had plenty of opportunity to learn from the man who has coached the Aliso Niguel girls since the program’s inception.

“I’ve learned a lot from him,” Henderson said of his stepdad, “but one of the biggest things is to not rush the process. You have to take baby steps before you can learn to walk or learn to run. He’s really taught me how to take a step back, how to explain things, … how to slow it down and how to teach.”

For his part, Elkins said he is excited to see what Henderson can do with this big step after so many years of taking baby steps in his coaching career.

“I’m excited that the timing for him finally worked,” Elkins said. “He was going through his teacher credential program, and the position had opened up a couple of times, but he felt he wasn’t ready to commit to it the way he believed it needed to be done.”

After high school, Henderson played two seasons of Junior A hockey in Montana, always returning in the spring to coach in the Aliso Niguel lacrosse program. He then stayed home and attended Cal-State Fullerton, where he played on the school’s club hockey team.

“He’s always had the ability to see the game,” Elkins said. “Whether it’s in ice hockey, which is his first love, or lacrosse, he’s been able to see the game differently, to see how things work, see how things break down, to anticipate, to analyze, then take that information and make it useful and get it to the players.”

And when he isn’t able to do that effectively, Henderson said he’ll turn to his assistant coach, former teammate and best friend, Shane Diamond — also a Wolverines’ alum (because, of course).

“He’s fantastic at reaching the boys a different way, if they’re not getting what I’m saying,” Henderson said of Diamond. “Having that little duo as a coaching staff has really elevated our JV team the last few years.”

So life in the family that is Aliso Niguel lacrosse goes on.

“It’s fun to be able to see your kids develop into responsible young adults and get to watch it from a close level,” Elkins said. “I’m enjoying it.”