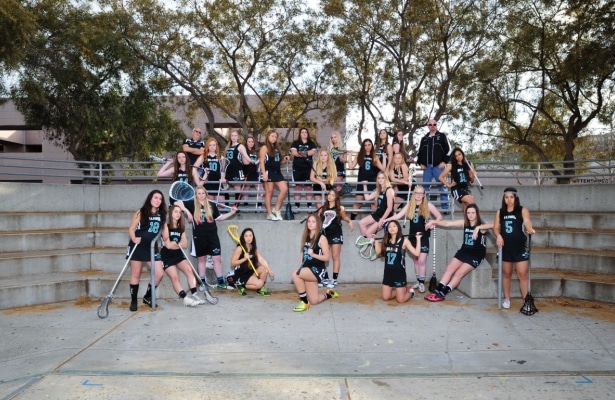 After losing 26 seniors in two years, 2015 was supposed to be a rebuilding year for the Aliso Niguel High School girls’ lacrosse team.  Instead of rebuilding though, the Wolverines reloaded and finished the season in a very familiar location.  After storming through the South Coast League with a 7-1 record, the Wolverines ended the season at the top of the league standings  for the third time in four years.

Led by the on-field leadership of senior captains Kendra Zeigler and Sydney Eskew and junior assistant captains Briana Cialdella and Ashley Holland, fifth-seeded Aliso enters tonight’s second round playoff game against Beckman High School (the fourth seed) with an 11-5 overall record.  Ziegler leads the team with 73 points (56 goals, 17 assists) but she has plenty of company.  Eskew (17g, 15a), sophomore Emily Grimes (39g, 19a), freshman Michaela Mahoney (35g, 13a), and junior Summer Jorgensen (22g, 13a) also put up big points this year.   On the defensive side of the ball seniors Caitlin Paine and Claire Laughery split time between the pipes to hold opponents to nine goals per game.

A much smaller class of seniors will bid farewell to the Wolverines this year. Christy Thomas, Cassidy Coggins, Ziegler, Eskew, Paine, and Laughery will graduate this month to make room for a new generation of Wolverines.  The rest of the roster will be around to chase yet another league championship next season.