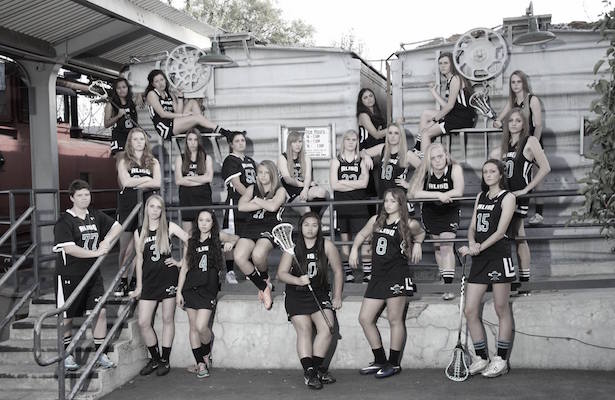 The Aliso Niguel Wolverines put up fast numbers within the first ten minutes of the game versus Santa Margarita Catholic High School. Starting off with a quick five goals the Lady Wolverines put the game out of reach early with quick ball movement and fast plays.

Aliso held off RSM until Emma Doelp of Santa Margarita had a free position shot and a quick goal to get the Eagles on the board. Shortly after, an assist from Doelp to Jordyn Fisher gave Santa Margarita a second goal with 4 minutes remaining in the half. After a quick turnover shot from Aliso, Santa Margarita answered with a pass from Jenny Dey to Katie Roschak, and Santa Margarita was back in the game at half time with Aliso Niguel leading 9-3.

Coming back from a rough first half, Santa Margarita continued to put up a good fight, but several fouls, turnovers and a draw loss gave Aliso’s Mix Mahoney the ball at the end and her goal put the Wolverines at 12-8 with 1:22 left in the game. The RSM Eagles played hard till the end, but it was the Aliso Niguel Wolverines who took the win home tonight.

Santa Margarita sophomore Erin DiBernardo had 3 goals and an assist tonight. Working from the midfield along with  Dey, the two Eagles  fought hard to get their team back in the game. Dey had 2 goals and an assist as well.  Doelp had the first goal of the game as well as an assist. Fisher and Roschak both contributed a goal for the final score.

Aliso Niguel senior Kendra Ziegler contributed four goals in the first half to put her team in the lead at 9-3 at halftime. Ashley Holland and Mahoney both had hat tricks to contribute to the win . Summer Jorgensen and Sydney Eskew scored one apiece for the Wolverines.

Aliso Niguel takes a rest for the next two days and will play Trabuco Hills this Friday at 7.

Santa Margarita will play at Mission Viejo tomorrow at 5:30 pm.