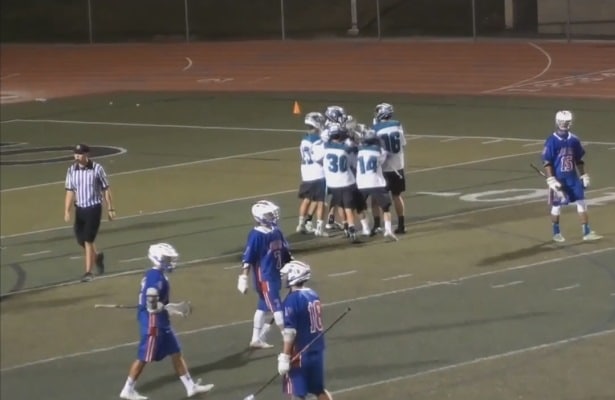 A highly anticipated matchup between the No. 9 and No. 11 teams in the Southern Division did not disappoint.  In what was most likely the game of the week, No.11  Los Alamitos traveled to No. 9 Aliso Niguel with both teams having something to prove.  The Griffins, challenged with an early season schedule that included Foothill and LA powers Oak Park and Loyola, came into the game with a 1-3 record.  They were anxious to confirm that they are  better than their record and that they deserve to be in the Top 10 conversation.  Meanwhile, the Wolverines were looking to improve on their 2-1 record and solidify their reputation as a Top 10 team.

Aliso jumped ahead first but Los Al quickly responded for a back and forth first half saw the Wolverines scoring first, Los Al getting to a 3-1 lead at one point, and Aliso coming back for a 6-3 lead at halftime.    The 2nd half started quickly with Michael Marino (63%) winning the face off and taking it straight down for a score of 7-3.  Just when all the momentum seem to be in Aliso’s favor, Los Alamitos came alive and went on a seven goal run to make the score 10-7.  Then it was Aliso’s turn to change the momentum, and they chipped away at the Griffins’ lead.  With Aliso down by one late with less than a minute and a half left, Jonah Rinaldi (3g, 2a) weaved through the whole Los Al defense to find the back of the net, tie the game, and solidify his magistracy reputation. Putting an exclamation point on how important faceoffs have become, Colorado Mesa-commit Marino won the critical ensuing face off to give Aliso possession. This is when Matt Jones (4 goals)would score the biggest goal of his career, putting Aliso ahead for good with 37 seconds left.  Again, Marino was able to control the face off and with a bit of effort, Aliso was able to run down the click enough before turning it over with not enough time for Los Al to get the ball down to their end of the field.

Los Al was fueled by three players turning in hat tricks for the game; Joey Weinman, Brandon Ezell, and Matt Fanelli. Jake Householder also contributed with 2 goals. Goalie Austin Stahl  (10 saves) came up with some keys stops late in the game to help preserve the win.

Aliso will head to Servite on Saturday, while Los Alamitos will host Esperanza on March 18th.