Alex Kowalski is In Command for Cal State Fullerton 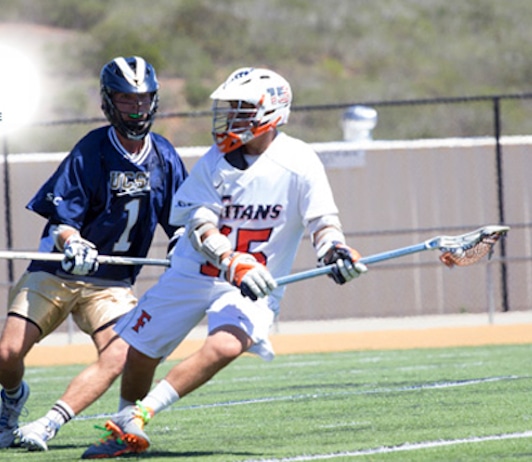 Cal State Fullerton senior Alex Kowalski (Huntington Beach ’13) earned the MCLA Division II Commanding Performance of the Week powered by Under Armour for the period ending Feb. 12. Kowalski put up seven goals and five assists over the weekend to help the No, 12 Titans jump out to a 3-0 start.  The full story from Jac Coyne at MCLA.US is below.

ATLANTA – Cal State Fullerton posted a pair of ranked victories over the weekend away from home, thanks to a monster performance from senior midfielder Alex Kowalski.

For his efforts, Kowalski earned the MCLA Division II Commanding Performance of the Week powered by Under Armour for the period ending Feb. 12.

Facing No. 14 Southern Oregon – the defending champions out of the PNCLL – on Saturday, Kowalski scored four goals and set up three others in an 18-7 triumph. He followed that up with three goals and two dimes against No. 17 UC Davis on Sunday.

For the weekend, he had seven goals and five assists, helping the 12th-ranked Titans improve to 3-0.

“Alex was a big part of getting us going this weekend,” said Fullerton coach Mike Ansel. “He is in his senior year and wants to get back to the national tournament. He’s helping the young guys realize that quickly. We have about seven ranked games on the schedule, so getting two of those out of the way with wins is big.”

For his efforts in earning the Commanding Performance of the Week powered by Under Armour, Kowalski will receive a new Under Armour Command Head – a $100 value. Under Armour is the proud sponsor of the MCLA.

Taylor Gulrajani, Fr. – UC San Diego
The Tritons started the season with a 2-0 weekend due in part to Gulrajani’s dominance at the dot. In the two games, the rookie won 29 of the 30 draws he attempted.

Ryan Kingsbury, Fr. – Portland State
The Vikings opened the season with a pair of victories over Pacific Lutheran and Humboldt State, thanks to Kingsbury. The rookie attackman combined for eight goals and two dimes.

Greg Swanson, Sr. – Palm Beach Atlantic
The Sailfish rolled to a three-game sweep this weekend, including a win over No. 25 Missouri State, and Swanson averaged seven points per outing (7g, 14a).