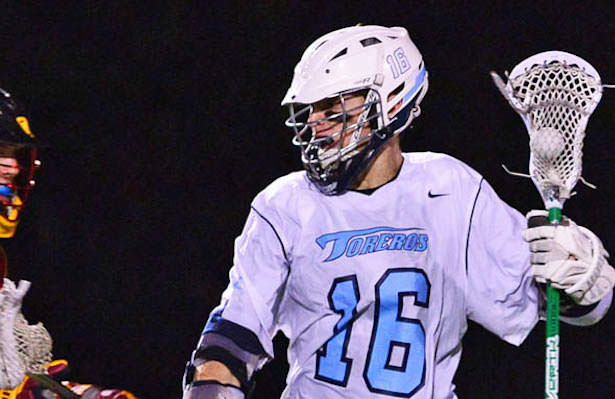 University of San Diego senior  Aidan Kennedy made the Under Armour Honor  Roll for the third time this season.  Kennedy made the most of his first ever playoff game, scoring 12 goals (on 15 shots) while assisting on three others, to amass a 15-point evening in the Toreros 27-8 win over Biola on Saturday.  He also surpassed the 200 career goals mark in the game.

Kennedy earned the MCLA Division II Commanding Performance of the Week powered by Under Armour for the period ending March 6 and was named to the Honor Roll about a month later.

With the win, USD advances to the Southwestern Lacrosse Conference semi-finals.  They will play Cal State Fullerton Saturday afternoon at 3:15 at La Costa Canyon.

La Costa Canyon High School – Admission is just $5/person and you can purchase tickets in advance by clicking on link below! LCC High School parking is free. NO PETS, TAILGATING, ALCOHOL, OR SMOKING. LCC Lax Team will operate a concessions stand and we encourage our guests to support their program through purchases. La Costa Canyon HS, 1 Maverick Way, Carlsbad, CA 92009.