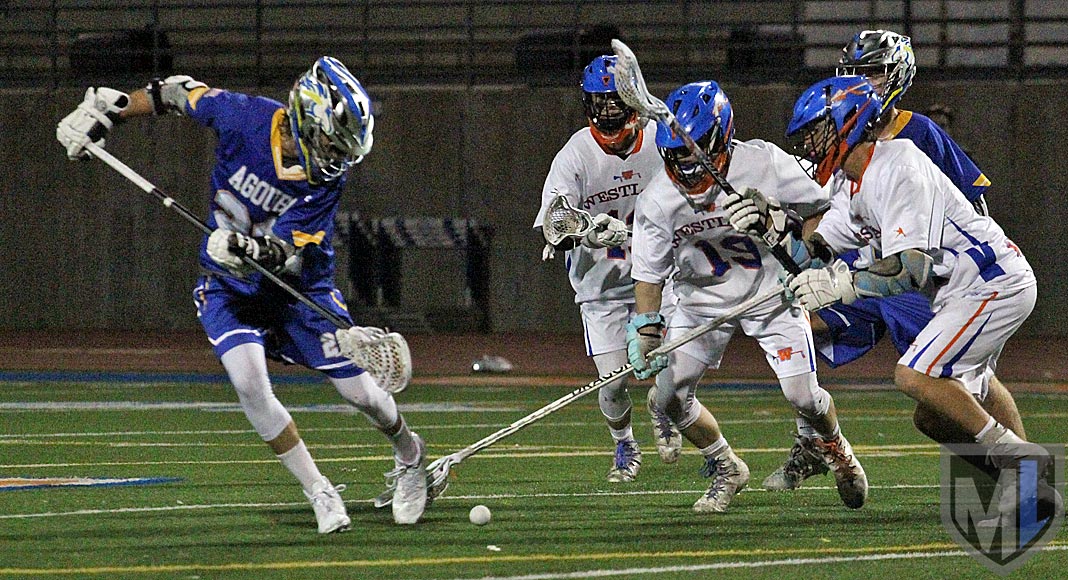 Fourth-ranked Westlake erased an 8-1 halftime deficit to pull even with No. 7 Agoura with 38 seconds to play Friday night, but Chargers junior LSM Sebastian Bernt picked up the ground ball off the ensuing face-off and scored to give Agoura a 10-9 Marmonte League victory.

The loss was the first for the usually high-scoring Warriors (7-1), and it also was the first time they’ve been held to single-digit scoring. Agoura (6-3) was able to win a one-goal game against a Top 10 team after previous losses to No. 5 Chaminade (8-7) and No. 6 Oaks Christian (7-6, in triple overtime).

“We knew we had to get goals early and get stops on D,” Chargers coach Sean Lindsay said. “I thought we played great defense. The third, fourth quarter, they cranked it up. They’re averaging 19 goals a game; we knew they were going to get their goals. But I’m very proud of my guys. They really wanted this game, and they played hard for four quarters. That’s really all I can ask.”

Agoura goalie Zach Tripp made at least four saves in the first half — and at least six overall — as the Chargers kept the Warriors at bay and built a lead. He also collected a number of ground balls around his crease, ending Westlake possessions, and picked off a couple of Warriors passes to end a few more.

“Zach is the best goalie in the state of California, hands down,” Lindsay said. “I’d have him in the cage over any other kid. When he’s on, and he’s seeing it, he’s a game-changer for us. We needed him to play big for us, and that’s exactly what he did.”

Between Tripp’s play in goal, Agoura’s aggressive defense and a handful of unforced errors, Westlake struggled to possess, turning in a number of one-and-done possessions.

“It’s a team sport,” Westlake coach Peter Swander said. “We weren’t able to link our behavior together. That’s what happens if you play as individuals.”

With the Warriors struggling to possess, despite a clear advantage at the face-off dot with sophomore Jacob Martin, Agoura was able to keep the ball in its offensive end for much of the second period. Chargers sophomore Douglas McCarthy scored all four of his goals in that quarter, including three in less than two minutes early in the period, helping Agoura to an 8-1 halftime lead.

Martin provided a spark for the Warriors in the second half, though, winning the third-quarter opening face and scoring unassisted. A few minutes later, he won another face, and Nick Reilly scored off a feed from Tyler Enderle to make it 9-3. In the fourth quarter, Martin fed Seamus O’Brien after another face-off win, and O’Brien’s goal, his third of the game, pulled the Warriors within 9-7.

Playing with a sense of urgency late, Westlake rallied, scoring three goals in less than a minute, capped by O’Brien’s goal off Martin’s face-off win, to make it 9-7.

With the clock ticking under two minutes, Duke Cohen fed Reilly in the crease on a restart from X, and Reilly buried it to pull Westlake within one, 9-8. Less than a minute later, Reilly dodged into traffic from the wing, lost the ball, recovered it, cleared some more traffic, then ripped a shot past Tripp to tie the game with 38 seconds to play.

That set the stage for Bernt, who scored in transition of a face-off win — Agoura’s first goal in more than 20 minutes of clock time — to restore the Chargers’ lead, 10-9, with only 25 seconds to play.

Fittingly, Tripp ended Westlake’s final possession, grabbing a loose ball just outside his crease and holding it while the clock ran out.