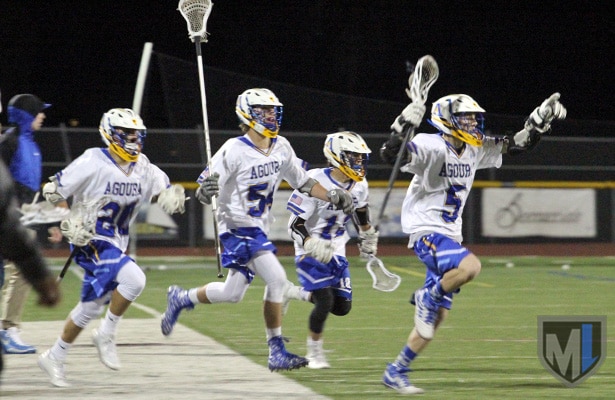 Sophomore middie Bradley Roache scored with 1:36 to play Wednesday, capping a wild final few minutes and lifting No. 7 Agoura to a 7-6 win over visiting No. 6 Newbury Park.

The Panthers led 5-4 entering the final period, but Agoura junior Marty Shargel scored his fourth goal of the game with 6:29 to play to knot the score 5-5. The Chargers moved in front 6-5 at the 5:01 mark on a goal from senior Lucas Lagola.

But Newbury, playing without senior middie Erich Wuesthoff for the third game in a row, wasn’t finished. JT Shoop scored his second goal of the game with 3:17 left to tie it 6-6.

That set the stage for Roache, who dodged up the rights side of the cage from X, continued upfield far enough to turn and get his hands free, then ripped a shot past Newbury goalie Spencer Cabello for the 7-6 lead.

Roache took a late hit after the shot, putting Agoura one man up for 60 seconds of the final 1:36. The Chargers managed to run more than a minute off the clock but turned the ball over late, giving the Panthers one more chance. Newbury junior Jason Wolfe got his hands free for a side-arm rip with about 15 seconds left, but Agoura goalie Jason Pawlak smothered the low shot, and the Chargers ran out the clock.

It was Pawlak’s ninth save of the game and fourth of the final period. Newbury’s Cabello was credited with 18 saves, keeping the Panthers in the lead most of the why despite a decided 13-4 advantage at the face-off dot for Agoura and sophomore Spencer Foreman.

Coach Sean Lindsay said Agoura (4-3, 1-2) was down to only a handful of healthy offensive players by the end Wednesday, and the Chargers are back in action against Valencia on Friday and at Oak Park on Tuesday before a chance to rest over spring break.