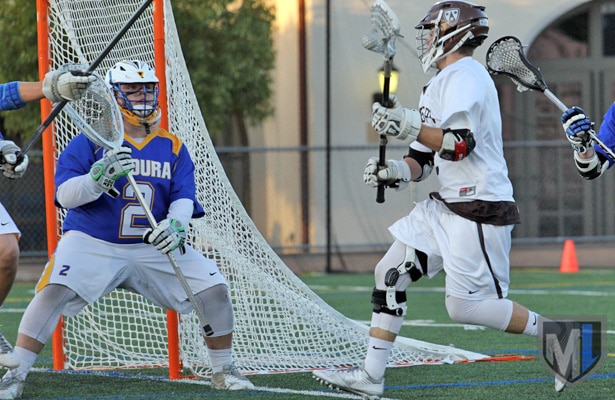 Senior goalie Jason Pawlak of Agoura, the LA Mavericks and Team West Coast has decided to take a post-grad year and has committed to The Hill Academy in Ontario, Canada, just north of Toronto.

From the school’s website: “The Hill Academy is an independent high school for dedicated student-athletes that provides premiere programming for next level placement and preparation.”

The Hill Academy lacrosse program is run by Brodie Merrill, a two-time All American and two-time Tewaaraton Award finalist at Georgetown. In 2005 he was named the NCAA Defensive Player of the Year and has been named DPOY in Major League Lacrosse six times.

“Attending The Hill Academy is an amazing opportunity for Jason,” Agoura coach Sean Lindsay said. “I know Brodie Merrill well; we have competed against each other in college and professionally for many years. He is one of the best coaches and educators in the sport of lacrosse. Jason is beyond lucky to have the opportunity to learn from such a tremendous coach.”

Congratulations to Mavs 2016 goalie, @jason_pawlak on his acceptance and commitment to attend the prestigious Hill Academy in Ontario. Jason has been a tremendous leader since his freshman year at Agoura and has given back by working with goalies in local youth programs. We can't wait to watch you continue your career next year with @brodiemerrill_ and beyond. Jason Pawlak | @thehillacademy1845 | AHS '16

As a junior at Agoura, Pawlak averaged 7.5 saves per game, anchoring a defense that allowed an average of only 7.2 goals per game. He had four games with double-digit saves, including 12 in a 6-4 win over Oaks Christian and 15 two days later in a 7-3 win over Redondo Union.

“The Hill Academy will give Jason an additional year to mature and work on the time management skills necessary for him to succeed as a student-athlete at the NCAA level,” Lindsay said. “He will also continue to develop his skills, as the Hill Academy will compete against the top programs in North America. I am excited for Jason and his family and look forward to seeing him play at the next level.”

Pawlak visited Hill Academy in early November “and was on cloud 9,” Lindsay said. He was ready to pull the trigger as soon as Hill processed his application and made his acceptance official, which finally came Tuesday.

“Jason has been a pillar for the Team West Coast program,” coach Steve Lane said. “He has been with us since the former Killer Bee program and has continued to be a major part in our success back East over the past four years. Jason has all the talent you want in a goalie and the personality to go with it. We know he is going to make a major impact at The Hill Academy.”

“By committing to The Hill Academy, Jason is stepping into a program run by one of the greatest players in the world, Brodie Merrill, and stepping into world class curriculum and training with that,” Lane said. “They regularly produce players that go on to national champion Division I, II and III programs. The Hill Academy is literally one of the best schools in the nation.”