Agoura Girls Pull Away from West Ranch in Semifinal 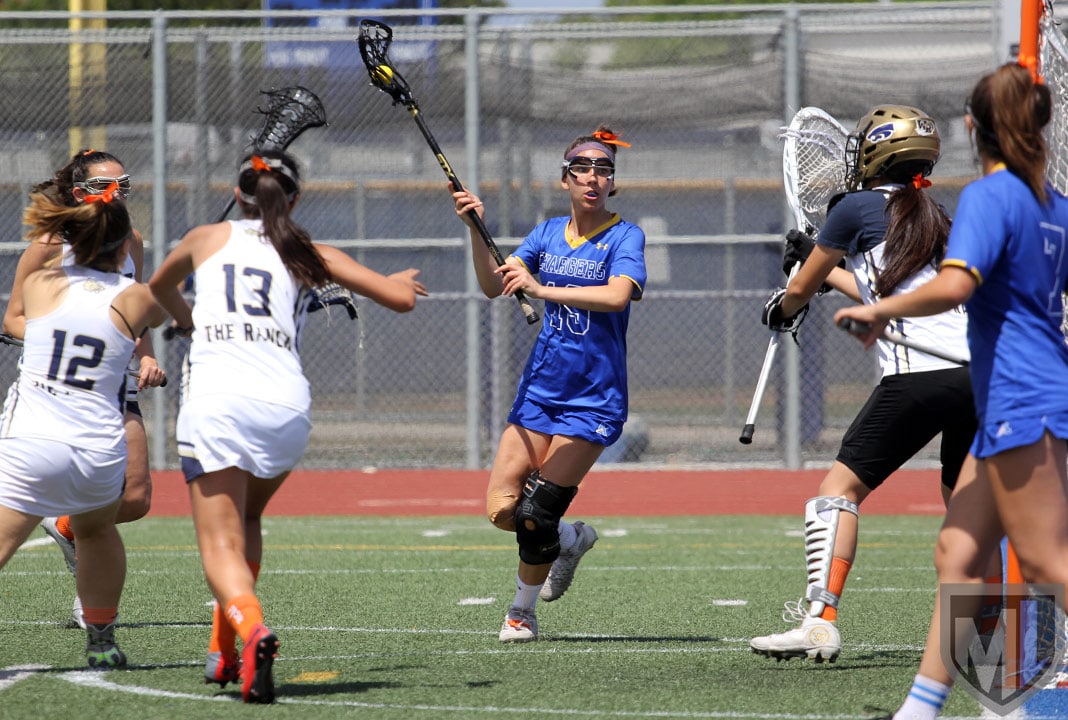 Seventh-seeded Agoura put together a 4-2 burst midway through the second half of Saturday’s semifinal game, and that was enough to push the Chargers past No. 6 West Ranch 15-13 and into Wednesday’s US Lacrosse LA Girls championship game.

Agoura (13-6), which was making its third consecutive appearance in the semifinals, will take on top-seeded Redondo Union for the LA title at Glendale HS (5 p.m.). The Sea Hawks (17-2) made short work of No. 4 Cate, winning 19-5 in the other semifinal.

After a back-and-forth, end-to-end first half Saturday had produced a 10-10 tie at the break, Agoura coach Courtney Schneck used her halftime talk to help her girls take a breath.

Schneck, who previously spent four years as head coach at Oak Park, is in her first year at Agoura. With the coaching change and Schneck’s maternity leave midway through the season, there was plenty of room for communication breakdowns. The Chargers lost 13-12 at West Ranch on April 16, their first game without Schneck the sideline, but has now won seven in a row since.

Schneck said she couldn’t be happier how her team has responded to the changes and progressed throughout the season.

“We’re excited; they’ve done a really good job,” she said. “There has been a lot of changes. This team, we’ve been guiding them, but they’ve been listening really well, and they’re working together as a team.”

That was evident in the second half Saturday, when the Chargers took control of the game in a way West Ranch (14-4) never quite managed, despite leading for all but one brief moment in the first half. The Wildcats led by two on a number of occasions in the first half, but Agoura always managed to tie it up.

In the second half, Agoura’s draw control, defense and patience turned an up-tempo game into a more methodical affair. And that hampered the Wildcats.

“They have a phenomenal face-guard system [defensively], and they were able to shut down our top attackers,” West Ranch coach Leesa Chelminiak said. “We still have a strong attack line, but having those two shut down completely really did play a role in the game. And the draw control, they do a great job on their draw control. We didn’t seem to get that figured out by the end of the game.”

The result was a 5-3 scoring edge for Agoura in the second half. Tatum Costello gave the Chargers their first lead of the second half and only second lead of the game with 15:20 to play, and Piper Spindle scored to make it 13-11 just 40 seconds later. Freshman Jackie Nuchow pulled the Wildcats within one at 13-12 with nine minutes to play, but Chelsea Boots restored Agoura’s two-goal lead at the 5:32 mark and Allison Jung made it 15-12 a minute later.

The loss ended a breakthrough season for the Wildcats who won the four-year-old program’s first playoff games.

“We’re young; we’re extremely young,” Chelminiak said. “We lost a lot of talent last year. We brought in 11 freshmen this year, and most of our leading players are freshmen, so we have three more years to get this figured out.”