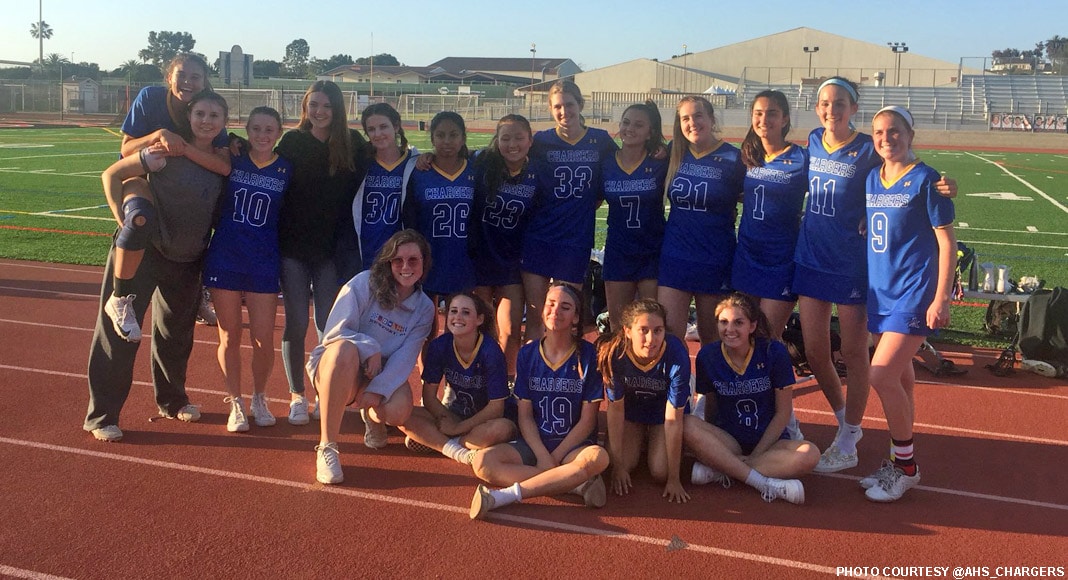 Seventh-seeded Agoura, which was 5-6 a little more than two weeks ago, won its fifth game in a row Thursday, stunning No. 2 Palos Verdes 13-6 in the second round of the US Lacrosse LA Girls Postseason Championship.

The Chargers advance to Saturday’s semifinals at Culver City HS, where they will face another underdog in No. 6 West Ranch, which toppled No. 3 Westlake 16-15 Thursday night.

GLAX advances to the next round of playoffs with a HUGE win over Palos Verdes 13-6. Olivia Quinn with 10 saves. Piper Spindle with 6 goals and Chelsea Boots with 4 goals!! @vcspreps @DNPrepSports @TheAcornSports #ChargeOn pic.twitter.com/WWpFSRKhDy

Thursday, Agoura took a 7-4 halftime lead at Palos Verdes, then extended it throughout the second half. The Chargers led 10-6 midway through the second half and tacked on three more for the final margin.

Top-seeded Redondo Union held off a furious rally by a short-handed Royal squad Thursday to win 7-6 and advance to the US Lacrosse Girls LA semifinals. The Sea Hawks (16-2) will face No. 4 Cate School, which beat No. 5 Glendale 11-7 on Thursday.

Redondo’s victory was not without some controversy, however. The Highlanders, who already were without senior defensive star Maddie Arrasmith, lost do-it-all star Holly Hall to a red card with 10 minutes remaining in the first half. Royal played the next 35 minutes of game time a player short and nearly knocked off the two-time defending LA champions on the road.

She received a yellow card early in the game for a dangerous free-position shot, then was called for a high-stick and given a second yellow and disqualification. The controversy, though, centered on whether Hall actually was the player who committed the foul. A photo circulated on Twitter by the Ventura County Star seems to indicate Hall, who will play at NCAA Division I Butler, was not involved in the play.

Here’s the play which resulted in Royal High star Holly Hall being ejected with a red card today in the first half of a Northern Division quarterfinal at top-seed @RedondoUnionHS. If you’ll notice, No. 22 (Hall) is not in the frame. Royal went on to lose, 7-6. pic.twitter.com/d69pGS092h

The Highlanders were within a goal of the Sea Hawks at 3-2 when Hall was sent off, and Redondo Union quickly surged to a 5-2 lead at halftime and 6-2 early in the second half.

But Royal wouldn’t go away quietly. Brianna Zapata and Kourtney Carter scored to bring the Highlanders within 6-4 with 15:12 to play. Redondo scored its final goal with 11:45 left to make it 7-4.

That’s when Royal senior Dominique Surabian went to work. She scored with just under 11 minutes left to pull the Highlanders within 7-5, then scored again seven minutes later to make it 7-6. Surabian actually had a chance to tie when she was awarded a free-position shot with 1:33 left, but Redondo goalie Eva Lovell made a high stick save. The Sea Hawks recovered the ground ball and ran out the clock.

Playing short-handed and still holding the high-scoring Sea Hawks to seven goals — they averaged 15 per game throughout the season — required quite a performance from the Royal defense of senior goalie Kelsey Wilson (10 saves) and defenders Megan Guardado, Keeley Harris, Melanie Le, Lauren Petrarca and Ava Romerosa.

Carter and Surabian each scored two goals to lead Royal 913-5), and Hall, Zapata and Guardado scored one each.

Brie Walker scored six goals, five of them in the first half, Thursday, propelling host No. 4 Cate School to an 11-7 win over No. 5 Glendale and keeping the Rams’ perfect record intact at 16-0.

Cate advances to Saturday’s semifinals, where it will face No. 1 Redondo Union. Last year, the Rams lost to Chaminade in the semifinals.

Thursday, Cate jumped out to an 8-2 halftime lead and withstood a strong second half from the Nitros (14-3). Walker (6g) and Maddie Erickson (2g, 4a) led the Rams’ offense, and Daphne McKeefry scored three goals.