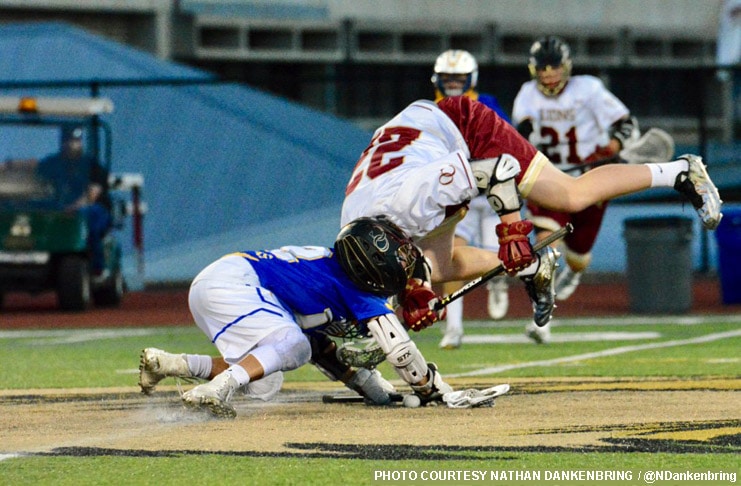 No. 6 Agoura beat No. 4 Oaks Christian 8-7 in overtime Wednesday, scoring on a dodge from X by freshman Douglas McCarthy that gave the Chargers’ their third overtime victory of the season and second over the Lions.

The win ties the Chargers for second place in the Marmonte League, alongside Oaks and No. 8 Newbury Park. All three trail No. 7 Thousand Oaks (9-4, 6-1) by two games.

Wednesday, Oaks Christian (12-3, 4-3) led 5-4 at halftime and extended its lead to 6-4 early in the third period. Senior Marty Shargel pulled Agoura within one at 6-5 heading to the fourth quarter.

The Lions again gained a two-goal lead early in the fourth, but goals from Jacob Roub and Shargel brought the Chargers even at 7-7 with 1:22 left.

Both teams had opportunities to take the lead in the final minute, but a potential Agoura goal was waved off by a crease violation, and Chargers’ goalie Zach Tripp stopped a Lions shot in the closing seconds to force the overtime.

After Agoura secured possession on a face-off win by Spencer Foreman and ground ball by Cooper Isaacs, setting up McCarthy’s game-winner. The Chargers set up what appeared to be a two-man pick play at X, but a false step by McCarthy’s defender gave him an opening up the right side of the crease. The Lions’ slide was late, and with his hands free, McCarthy bounced his shot past the Oaks goalie.

In the season opener at Crespi, McCarthy scored the tying goal in the closing seconds on a similar play, sending the game to overtime. Shargel scored the game-winner in the extra period.

Shargel led Agoura with three goals Wednesday, and McCarthy had two. Cort Rogers led all scorers with four goals for the Lions.

Agoura (11-4, 4-3) has three games remaining in the regular season, all league contests — at Thousand Oaks on Friday and at Westlake and home against Calabasas next week.

Oaks Christian plays at Calabasas on Friday, then plays host to Newbury Park and travels to face Westlake next week.

Some information in this report originally appeared on @VCSpreps and vcstar.com.