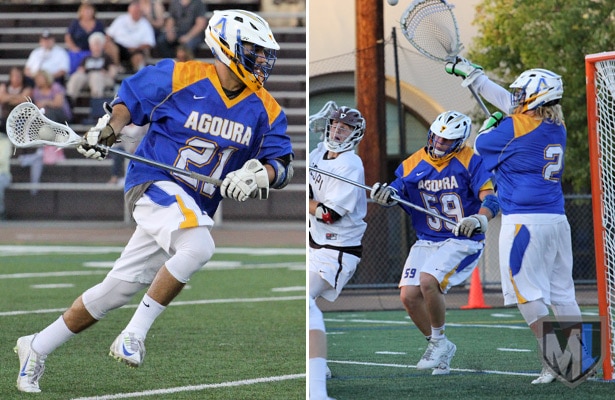 The Agoura Chargers were voted No. 10 in the US Lacrosse/MaxLaxLA preseason coaches poll, a spot they flirted with all of last season before ultimately earning the No. 10 seed in the playoffs. Can they improve upon that this season? Here is our Agoura 2016 preview:

Coach: Sean Lindsay. Assistant coach: Jack Zorzi
Last season: 6-10 overall; 4-6 Marmonte League (fourth place).
2015 playoffs: Lost in the first round to Crespi, 9-5.
2015 recap: The Chargers struggled all season to score goals, averaging only 7.3 per game and reaching double-figures only three times — twice against Calabasas and once in a 14-10 regular-season loss to Crespi. But the Agoura defense was among the area’s best, allowing only 7.2 goals per game. Four of Agoura’s 10 losses were by a single goal, and two of those were in overtime. With a little luck, and just a bit more offense, the Chargers could have been 10-6.

2016 Outlook: Even with the loss of All-American defender Swigart to graduation, the Chargers should still be stout on defense with Glassman, Gauthier, Dankenbring and Isaacs in front of goalie Pawlak. If a healthy Bar and an improved Shargel can help generate more offense, Agoura could swing a number of close games in its favor.

Can the Chargers advance beyond the first-round of the playoffs, which they haven’t done since 2013? Early games against Crespi (Feb. 27), at Harvard Westlake (March 5) and at Peninsula (March 8) will reveal a lot.