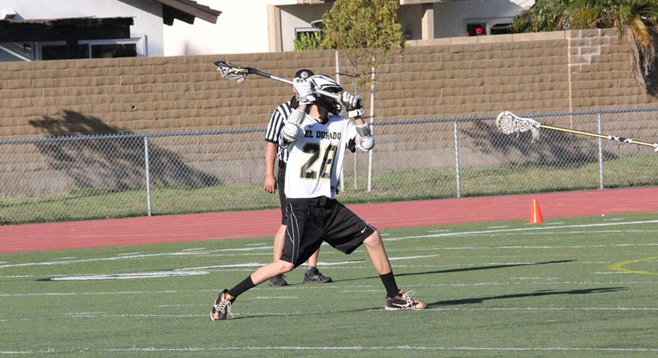 Both schools have been struggling during the 2014 season.  The Valencia Tigers are the new kids on the block, having just started the program two years ago.  Coach Paulo Sunio has been working hard to introduce the sport on the Valencia campus.  But with many first and second year players, it’s a challenge playing against more experienced opponents, as the Tigers came in with a 0–5 record.

El Dorado has struggled to generate a consistent offense.  They lost almost all their top scorers to graduation last June and are just now finding new players who are improving on offense as they enter the contest with a 1–9 record.

The Tigers started out strong, scoring the game’s first goal and holding a 1–0 lead at the end of the first quarter.  Goalie Steve Anaya (who finished with 13 saves) stymied the Hawk shooters.  El Dorado started hitting the back of the net to take a 5–2 halftime lead.  They continued the push for the second half, finishing with a 13–4 win with nine of the goals assisted.

Valencia turns right around to host Esperanza at Bradford Stadium on their campus on Wednesday.  El Dorado travels to face the Tillers of Tustin on Thursday.  Both are Century League games.