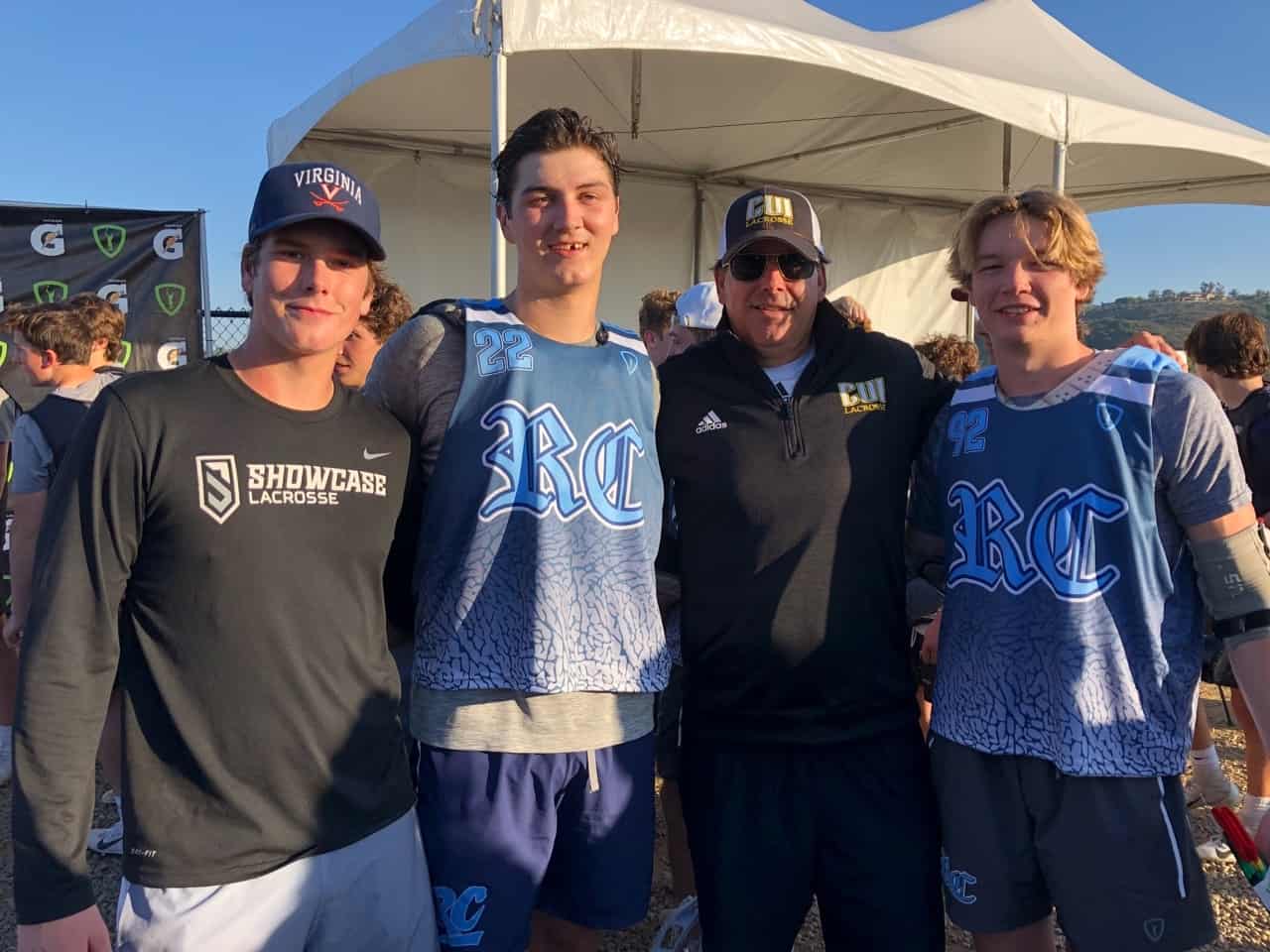 Lots of buzz the last week from local players talking the elite division finals possible match ups possible in the final game. There were some really nice teams.  Final game came down to RC vs MadDog, it was not a disappointment, can’t remember a local club game with anymore talent or intensity.  They got down Sunday in Del Mar.

Coaching match up Jono Zizzi and Brian Winterfelt for RC vs Tommy Duerr from MadDog.   RC made nice adjustments at halftime particularly on the face off , as well as on defense and Tommy had his squad with a chance to tie with seconds to go.

As far as the play its was excellent, and two from each team stood out. For RC, it was  Dewey Egan ( UNC)  and Ajax Zappitello ( Maryland).   Egan is a freak.  He was just about unstoppable when he got his chances to dodge. Scored or created a slide situation early just about every touch when he went the cage.  Kid is legit fun to watch. He went beast mode when it was needed.   Zapitello cleaned up all weekend and had 2 goals in the finals as an LSM.  He’s a big timer creating offense. On Saturday he looked off a defender and rolled back to his left and stuck one low and away for a goal,  was just legit.

For MadDog it was a couple of out-of-towners, Dylan Farley and Truitt “the Truth” Sunderland.

Farley, a FOGO out of Georgia, was simply on fire. Kid was red hot. Won a bunch a draws with super quick move to win it in front. Then once RC double pole’d the face off and tried to tie him up he won that draw back to his left flipping it to his wing man.  Small and quick, he was a handful and a force in the game.  Due to his quick start RC didn’t have the ball much in first half, and MadDog took a 4-2 lead into the half.

Sunderland, a 2022 from Calvert Hall in Baltimore was uncoverable in the first half and plenty of trouble in the second. I didn’t get stats on the game but he created plenty.  He’s a top recruit nationally, I found out after the  game. As a freshman at Calvert Hall he had 58 pts and we are talking Baltimore catholic school league. Top competition. Small and super quick he gave RC lots of trouble.  Some nice 22’s around but gotta believe he’s top 10 ranked in college coaches minds.

The second half was a battle back and forth with the game on the line until the final whistle.  In the final minute there were two de-stickings that were nasty. Zapitello hit a back check and the attackman’s stick went flying. Not to be outdone Griffin Dooley ( Penn State) hit his own back check to get ball back for Mad Dog when they were down a goal.

>Final was 8-7 RC, very much a game every second of this one, crowd that stuck around was treated to some great lacrosse, physical but clean. Can’t remember four guys being that good in an elite final same game, fun to watch.

Side Notes: Coach Jimmy Borell got GQ man of the tourney, had some kinda tracksuit you don’t see around lax fields on Saturday, was a classic. He has taken over at Loyola, plenty of talent with Gaffney, McAusland and Horowitz this year. Could be the year for Jimmy to get his first CIF championship, wouldn’t be surprised at all, excellent coach.

A 2022 out of OC got some nice runs over the weekend for Maddog, Drew Anderson of Los Al. Not many 22’s playing w the big boys. That’ll help this season. Drew runs with Ed Shean  ( OSU commit). Also Cade Poe is excellent 2020 FOGO. Been a while on Los Al being top 5-6 type team, could he the year the Griffs are back.