Coach Fox and the Foothill Knights Hit the 200-Win Milestones 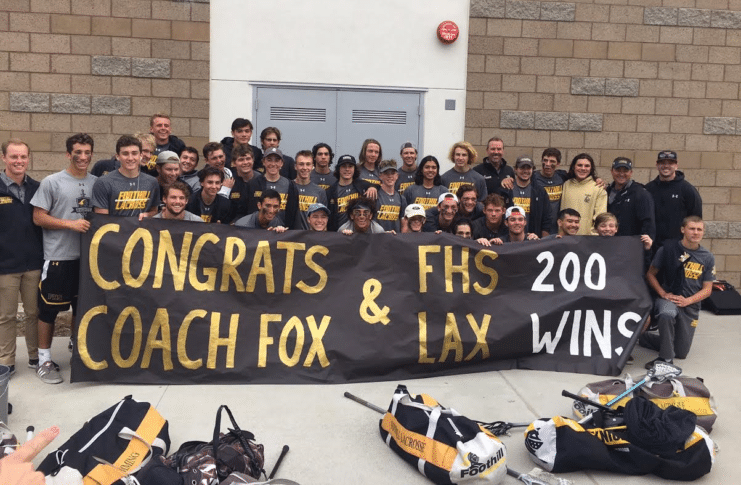 Saturday’s win by the Foothill boys lacrosse team over San Clemente made it 200 wins (since joining CIF in 2006) for coach Jon Fox and the Foothill Varsity Program. Coach Fox, who began his lacrosse career playing for the UCI Anteaters, started the program at Foothill in the spring of 1999. At that time few people in the Orange County area had ever heard of lacrosse, let alone seen a game. But through his keen knowledge of the sport, paired with an encouraging approach, Fox grew the program.

Fox’s first full FHS Varsity club season was in 2000. That team included current JV Coach Rick Forehan and that team reached the Orange County /Los Angeles Finals placing 2nd. In 2001, FHS reached the finals and won, then went on to place 4th in the state championship tournament. In 2002, The Knights won the Orange County Lacrosse Association and finished 2nd in the State. Then, in 2003 & 2004, FHS repeated as OCLA champs and won back to back state championship tournaments. In 2005 FHS was upset in the OCLA finals by St. Margaret’s.

As the game of lacrosse grew across the OC, so did Foothill’s competition. Foothill has continued to find themselves in the later rounds of the OC CIF playoffs since 2014, but the championship has become more elusive. Now, with a win over San Clemente Saturday in the semi-finals, Fox and the Foothill Lacrosse family hope that this year will not only be the year of their 200th win, but it will be the year when the championship came home.