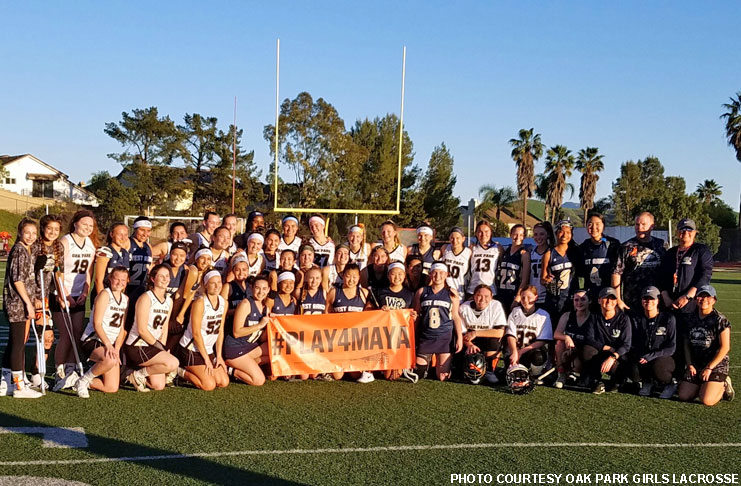 The No. 2 Oak Park Eagles defeated No. 12 West Ranch 17-10 on Monday, but what was far more important than the lacrosse game was having both teams come together beforehand to show their support for West Ranch senior Maya Evans, who is battling Leukemia. Players and fans wore orange ribbons to show their support, and we all wish Maya a complete recovery.

As for the game:

Oak Park took the lead about 30 seconds into the game on a goal from Livi Fagnani, her first of five on the night. The Eagles continued to struggle with early turnovers, which allowed the Wildcats to build a 5-4 lead and hang tough with the Eagles over the first 15 minutes of play. The Eagles eventually found their passing rhythm and took an 8-6 lead into halftime.

The second half was all Eagles. They extended their lead to 11-6 four minutes into the second half and finished with nine second-half goals.

But it was the defense that led the turnaround. Junior goalie Alexis Robinson was a monster between the pipes, making save after incredible save, and with help from her defenders — junior Harper Wayne, sophomores Maddie Suwara and Courtney Mueting, and freshmen Riley deVarennes, Pifer Dryden and Kathleen Dryden — the Eagles held the Wildcats to only four goals over the final 35 minutes of play.

The Wildcats were led by Audy Kim (3g), with Hope Jin, Lauren Bensmiller and Bella Gervasi with two goals each, and Emmalyn Kim with one goal. Goalie Jordyn Adamek-Postelwaite made 12 saves.