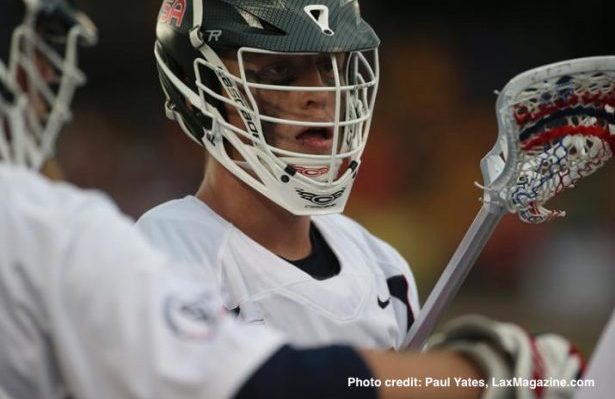 COQUITLAM, B.C. — Ryan Conrad capped an incredible comeback by the United States, handling Simon Mathias’ pass from behind the cage in traffic in front of the goal, and burying a shot with eight seconds to play to lift Team USA to a 13-12 victory over Canada in the championship game of the 2016 Federation of International Lacrosse Men’s U19 World Championship. To watch the game winning goal, go here:  U.S. U19ers Take Gold with Thrilling Comeback Win Over Canada – Lacrosse Magazine.

The world championship is the eighth consecutive for the United States, and they remain the only nation to win the event since its inception in 1988, improving to 47-2 all-time in FIL U19 play.

Canada scored the first six goals of the game, led 8-2 at the half, 11-8 after three quarters and still had a three-goal lead at 12-9 with just over seven minutes to play before the U.S. mounted its final comeback. Timmy Kelly scored with 7:04 left to cut it to two, Mac O’Keefe scored with 5:36 left to cut it to one and then Jared Bernhardt buried an outside shot to tie it with 2:34 remaining.

Austin Henningsen dominated on faceoffs throughout the second half for the U.S., and he won the faceoff after Bernhardt’s goal. Tyler Dunn held the ball for most of the possession for the U.S., even after a stall warning was put on. Bernhardt started a drive from the left wing, but was cut off and the U.S. moved the ball behind. Mathias found a cutting Conrad and the University of Virginia standout scored the go-ahead goal with eight seconds remaining.

The scene was eerily similar to the Team USA Spring Premiere between the U.S. and Canada at the IMG Academy in Bradenton, Fla., in January. In that game, Drew Supinski gave the U.S. an 11-10 lead with six seconds to play. Justin Inacio then won the faceoff for Canada, flung the ball in front of the goal and Ryan Lanchbury scored as time expired to send it to overtime. Canada went on to win the game 14-13 in overtime.

This time, Inacio won the faceoff after Conrad’s goal, but his pass went over the head of a teammate and the U.S. was victorious.

The U.S. outscored Canada 5-1 in the final quarter, and four of the five goals were assisted.

Henningsen and U.S. goalie Willie Klan played major roles in the U.S. comeback. Henningsen won 15-of-26 faceoffs in the game and Klan overcame a slow start. After making just one save in the first half, Klan made seven in the second half, including five in the fourth quarter.

Conrad was one of five U.S. players to notch two goals, joined by O’Keefe, Mathias, Kelly and Alex Roesner. Mathias (2g, 2a) and Michael Sowers (1g, 3a) led the U.S. with four points each.

Tre Leclaire led Canada with three goals and Ethan Walker and Tanner Cook each scored twice. Kyle Hebert made 10 saves for Canada, but just one of those came in the fourth quarter.