Mustangs Gallop into Second Round 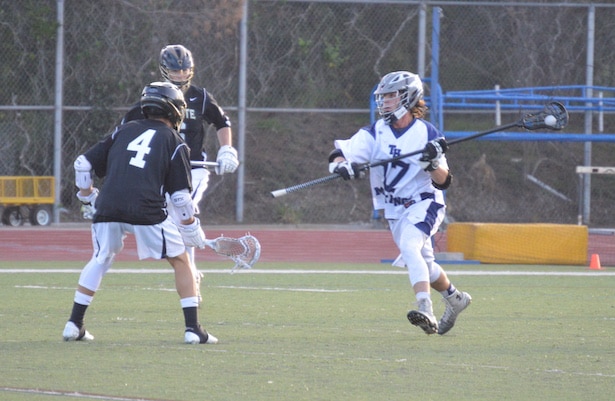 No. 7 Trabuco Hills and No. 10 Newport Harbor faced off in opening round playoff action at El Tor High School on Tuesday.  Keeping with the theme for the first round of the boys’ lacrosse playoffs, the Mustangs advanced to round 2 with a convincing 13-2 victory. The Mustangs lead from wire to wire but really pulled away in the second half.

The game started slowly with the Sailors jumping out to an early 1-0 lead on Alex Pearce goal. The Mustangs responded quickly with two unanswered goals and never looked back. Pearce scored both Sailors’ goals. The second one coming in the second half after he took a slash, re-dodged with a flag down and scored.

The Mustangs defense was anchored by Patrick Zanio, Jason Rivera, and Jonathan Salgado and Scott Barger. Goalie Nick Wilson made 11 saves and finished with a 84% save percentage.

We caught up with coach Eric Bassett post game. MaxLaxOC.com ” You guys have that scappy gym rat thing going on in a good way. They all look like they know how to play the game and hustle, make sense?” Coach Bassett responded back without hesitation, ” Scrappy is a good way to describe our team. We are blue collar all the way.”

As for other happenings on the field Barger had a great game. He picked off multiple passes, had to have at least five. He was all over the ground balls, can run by people and when he got a player running to get away from him he closed out under control and put the ball on the ground.  Several players had nice games but he was the best player on the field no doubt about it. If you have been around OC lacrosse you know exactly who he is because he’s been doing it for varsity for four years.

When coach Bassett was asked for comment on Barger he broke it down very simply. ” I’d lose a lot of sleep if I didn’t have him. He has the heart of a lion, he’s an amazing player”.

Perhaps Barger’s most impressive play of the night was on that didn’t count.  He stuck one as the clock ran out that was waved off. It was a nice move to get away from pressure, got underneath his defender on the wing and stuck a lefty rip in the upper left corner. Nice move…

The Mustangs return to playoff action on Thursday when they travel north to Tustin to face off against the #2 ranked Foothill Knights. The Mustangs lost to the Knights 8-7 at Trabuco Hills earlier this year, so both teams should expect a great game.

Devin Arkison was a 3X All American at Hobart College, is a member of the NJ Lacrosse Hall of Fame. He coaches elite high school and works privately with defensive players that want superior fundamentals at all levels. He can be reached at d_arkison@hotmail.com His most recent commits are to Notre Dame, Denver and St Joes.