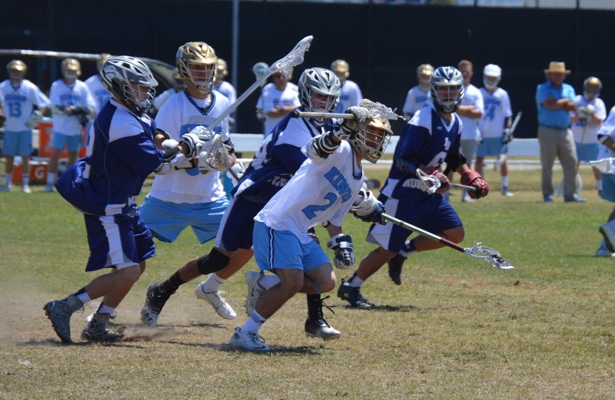 The No. 8 Trabuco Hills Mustangs traveled to Corona Del Mar on Saturday to face off against the top ranked Sea Kings. Those in attendance were treated to a beautiful day with a slight ocean breeze and not a cloud in the sky. Jordan Greenhall got the Sea Kings going early with the first of two goals he would score in the quarter . Trabuco Hills answered a few possessions later when Holden Evans fed Billy Barron for a goal in front of the net. The first quarter was played at the Mustangs’ pace as they sat back in a zone defense and elected to have the Sea Kings beat them from the outside. Holden Evans was the benefactor of a hockey type goal when his lefty shot bounced off a Sea King defender and found its way to the back of the net to put the Mustangs up 2-1 early into the game.  Greenhall tied the game when he took advantage of a botched clear attempt by the Mustangs and finished into an empty net.  The Mustangs were able to hold tight on several defensive possessions and regained the lead when John Kauo scored on a dodge from up top. The first quarter ended with the Mustangs ahead 3-2.

The Mustangs took a defensive approach to faceoffs in the second quarter, using Scott Barger in an attempt to slow the Sea Kings down.  Jason Simaan continued to dominate as he has all season long though, and the extra possessions lead to the Sea Kings controlling the tempo and dictating play.   Stephen Von Der Ahe put away a pass from Ryan Meckler two minutes into the second quarter to tie the game.

Simaan won the ensuing face off and appeared ready to score again when Barger came up with a huge yard sale check and take away and send the action back the other way The Mustangs held possession until the Sea Kings gained possession with what appeared to be a clean take away. The ball rolled to midfield and Mustangs defender Zanio scooped up the ground ball and threw a behind the back pass to Harrison Evans. Evans weaved his way through traffic and fed Jason Kauo for a goal to put the Mustangs back ahead 4-3.

Although the Mustangs held the lead, the CdM was dominating possession.  The Mustangs’ zone defense of Patrick Zanio, Jonathan Salgado and Jason Rivera stood up to the continuous pressure from the Sea Kings and kept the game close with several take aways and clears.   The Sea Kings finally broke through when Von Der Ahe fed Meckler late in the first half and Sachin Gokhale finished with an assist from Greenhall about a minute later to give CdM a 5-4 lead.  Jason Kauo turned the momentum back in the Mustangs’ favor when he fed a nice pass to Harrison Evans for the equalizer with 32 seconds left in the 1st half. The first half ended with the teams tied 5-5.

The second half saw the Sea Kings make a few offensive adjustments for the Mustangs zone, and Greenhall (assisted by Gokhale), Von Der Ahe, and Will Favreau rattled off three goals in three minutes to pull ahead 8-5. The Mustangs settled things down and held the Sea Kings scoreless for the remainder of the 3rd quarter. Harrison Evans received a pass from his brother Holden and finished to bring the Mustangs within 2 goals. The Mustangs were able to kill a man down situation and Harrison Evans finished his hat trick with a nice dodge leading to a goal. The Mustangs were back within one goal at 8-7 to end the third quarter.

The Sea Kings depth  and possession advantage proved to be too much for the Mustangs as Meckler, Von Der Ahe, Meckler again, Simaan, Eric Fries, and Greenhall rattled of six unanswered goals in six minutes to give CdM the  14-7 win.