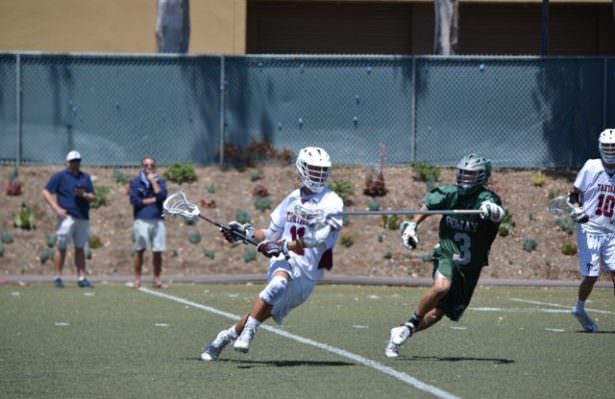 Orange County powerhouse St. Margaret’s ended a two-game losing streak to San Diego teams by beating Poway (No. 7 in the west) 8-6 on Saturday.  The Tartans are the defending champions of the Southern Section, and came into the game with a deceiving 7-7 record. The game was close from beginning to end, with stingy defenses and solid goaltending at both ends of the field making goals hard to come by. The Titans showed off their depth with five different players scoring their six goals. The Titans host Foothill, the team ranked just ahead of St. Margaret’s in the Orange County coaches’ poll, on Tuesday.

The Tartans jumped out to a 2-0 lead with  Conrad Hampson putting away a feed from Shanks and Samuel Harnisch (Denver) taking advantage of an assist from Kevin Groeninger.  Poway came back strong and took a 3-2 lead into the second quarter on the strength of unanswered goals from freshman Kobe Brown, Nick Beeson (Bryant) assisted by Brad Belasco (Westminster), and LSM Jake Fiske (Bryant).  In the second quarter, the defenses went from stingy to stingier with Justin Welling helping Conrad Hampson to score  the only goal of the quarter to close the half in a 3-3 tie.

The defense-first theme continued into the second half.  Poway, unable get anything past Tartan Goalie Payton Fales (Colby) in the third quarter, was shutout for the second consecutive quarter.  Shanks teamed up with Nick Kuljis to score his first goal of the game and the only goal of Q3 to give St. Margaret’s a slim 4-3 edge with 12 minutes left to play.

Both offenses came to life in the fourth quarter. Shanks gave the Tartans a two-goal edge with about 9 minutes to play before Poway came roaring back with goals from Zach Hodge (Cleveland State)  and Austin Greaves (Young Harris College), assisted by Brown, to tie the game.  With Poway building momentum and threatening to come back, Shanks took over and responded with two goals in less than a minute to make it 7-5 with four minutes to play.  Two minutes later Hampsen added his second to give St. Margaret’s a three goal cushion. Poway continued to press but could only muster a goal by Fiske to make it an 8-6 final score.