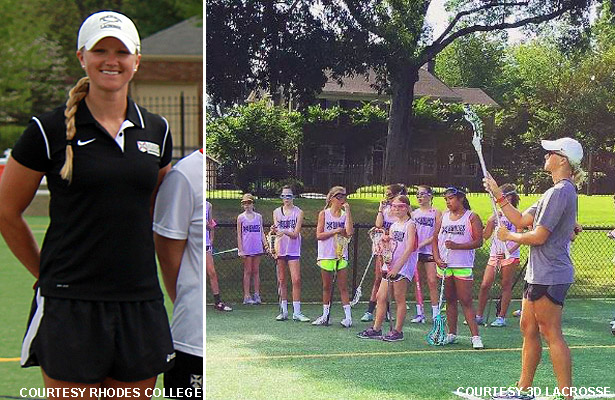 Though those first two girls clinics will be conducted only on the lacrosse field, true to the 3d mission, even the girls eventually will be using the club’s Box/Field Hybrid Development System, something Liebig says give 3d girls players an advantage.

“The picks, the screens, being man-up, man-down — we’re so much closer to the boys’ [game],” she said. “Being able to play it more like the boys’ game is giving 3d an upper hand.”

“We were the only ones in our conference doing it, and there’s a reason we won our conference,” she said, ratting off a long list of other big-time programs that also do it.

“Box coaches are coming in and running box practices for these teams,” Liebig said. “There’s a total crossover for these girls — tight spaces, soft hands, shooting on smaller goals — 100 percent you can transfer those skills.”

The November clinics in Santa Barbara are just the first opportunities she will have to introduce those concepts to SoCal players. She said 3d also is planning a clinic in Los Angeles on Dec. 19 and one in Orange County on Dec. 20. Details and registration for those is still to be determined.

Liebig, who also will be coaching the JV team at Foothill HS in Tustin, said her mission as 3d’s ambassador for girls lacrosse in the region is to provide quality instruction and coaching for a sport that is ready to take off. In 2010, the Southern Section listed 52 CIF girls lacrosse programs. Last spring, there were 76. But the coaching isn’t keeping pace.

“I feel bad for girls who have to drive to San Diego to get good coaching and good competition,” she said, “and that’s what I want to bring. there’s not really an elite level here now.”

Beyond the clinics and instruction, Liebig said 3d plans to offer select teams that will play in local and national tournaments, but after initially thinking they could get those teams in place for winter events, 3d decided to step back and focus its efforts on fielding those teams in 2016.

“We’re in that building phase, trying to get the word out there,” she said.