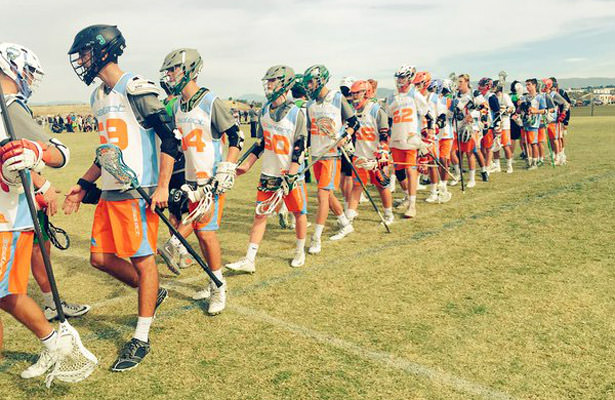 A few days after his 3d San Diego 2018 squad won the Boys 2018 division at the Oceanside Hustle, coach Kevin Cooper still marveled at the way his players pulled it off. After opening Saturday with three dominating wins in pool play, 3d San Diego 2018 faced a much stiffer test on Sunday.

That brought San Diego’s goal differential in the tournament to 45-3 through four games. The defense was anchored by goalie Kellan Cutting (Poway). “He’s really special,” said Cooper, who coached at Poway last spring before moving to San Marcos for the coming season.

That win set up a championship showdown with 3d Oregon 2018, which Cooper said had a bunch of players already committed to Division I schools — including Sam Handley, a 6-foot-3 attackman committed to the admission process at UPenn.

“Everyone in the company [3d Lacrosse] is at this tournament and telling me how good Oregon is,” Cooper said. “There was a lot of hype and a lot of talk about the Oregon team, and we kind of used that to our advantage.”

“Everyone told me [Handley is] the guy you have to stop,” Cooper said, “and Chase was just a stud. He didn’t let in a goal to the kid all game, and the kid was dodging and going to the goal every time. He started to get frustrated, and the rest of our guys saw that and fed off it.”

Oregon managed a 4-3 halftime lead, but San Diego turned it around in the second half behind attackman Chase Taylor (Great Oak/Temecula), who scored three goals in the game, to post a 6-4 victory.

“The guys really trusted in the system and the offense and played together as a team,” Cooper said. “We were down 4-3 in the second half and ended up winning 6-4, and things like that don’t happen against a team like that unless you trust in each other.”

Among the plays that turned things in San Diego’s favor, Cooper said, was one Taylor made on a ride early in the second half, with the team still trailing 4-3. Taylor intercepted a pass at midfield, with the Oregon goalie well off his line helping with the clear. But rather than fire a long-range, hopeful shot at the cage and possibly waste a possession, Taylor ran it in, dodged the goalie and another defender to score on the open net and tied the game 4-4.

Cooper also cited the play of midfielder Kobe Brown (Poway) in the tournament. “He’s just relentless,” Cooper said. “He does everything for us — plays man-up, man-down, one-man clears. He’s the best athlete on the team; he doesn’t score a ton of goals, but he probably leads the team in groundballs. He’s the best shortstick defender we have, too.”