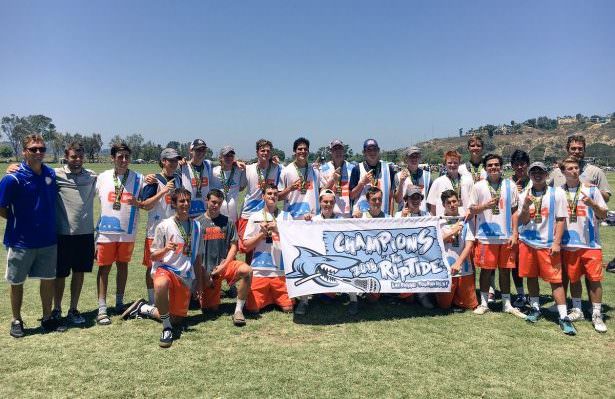 Anyone who has played club lacrosse in the summer can tell you winning three quality tournaments at the elite level is not an easy task. However, an impressive groups of rising juniors playing for 3d San Diego did just that this year.  After losing their first game of the summer at the Denver Shootout in mid-June, 3d San Diego 2018 reeled off 15 straight wins while winning the Denver Shootout , Patriot Games and the Riptide. The three-time champions were coached by 3d Manager and Chesapeake Bayhawks midfielder Kevin Cooper.

Cutting and Crawford anchored a 3d San Diego defense that allowed only four goals per game at the Riptide. Cutting makes saves that he should not make.  Crawford smothers the best attack man on every team, making it tough for the opponent to score. Gallagher and Darcy also helped their Poway teammates lock down the defensive end of the field. Brown, an elusive midfielder, had a great weekend clearing the ball, scoring in crunch time and just getting under the skin of every team he played. While Brown was dancing all weekend, he found Greaves, a left-handed attack man,  open on the back pipe a number of times.  Morrisey made it tough for anyone to stop the offense. His speed and quickness makes him a special player and hard to cover.

Riverside County players have also made a big impact on this team. Ben Hamilton (Santiago High School) had a dominant performance at the face off X, winning the majority of his draws. The Great Oak High School defensive duo of  Nolan Adams and Collin Bowers  made it tough for the opposing teams to get their offense started.  The twin towers of  Chase Taylor (Great Oak, Furman commit) and Ruben Santana (Santiago) create match up problems for every team they face.   Their size (6’2”plus, 190 lbs), outstanding skill and Riverside toughness, means teams need large and strong defenders to be able to play with these guys. They used that size, strength and skill to make teams slide and put the ball in the back of the net.

The Riptide championship game paired up two of the best 2018 teams in California. SoCal Express out of Orange County came to play in the championship game. With division one commits and great coaching on both sides of the ball, this game was clearly going to be a classic! The game went back and forth between the two teams but 3d San Diego’s left handed midfielder Peyton Rezanka (Cathedral Catholic) was ready to end the game. Rezanka’s 3rd goal of the game was an on the run jump shot while dodging the left alley. With 2 minutes left and down by one, SoCal express did not stop shooting, with a barrage of shots in the last minute of the game, San Diego second half goalie Matt O’Donnell (La Costa Canyon) made a door stop save with 30 seconds left to keep SoCal Express from tying the game. Rezanka’s goal was enough to get Rezanka the MVP and San Diego its 15th consecutive win and third consecutive tournament championship.