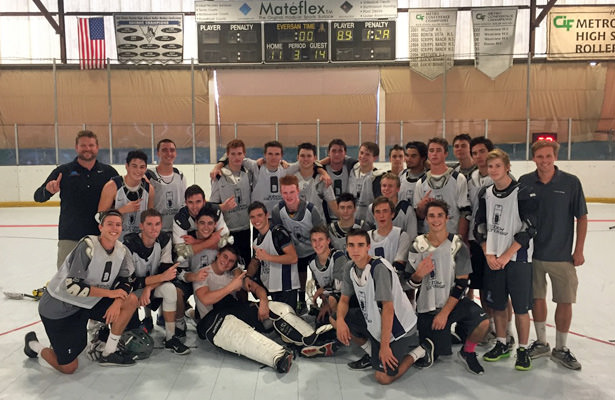 Lacrosse players from all over San Diego County converged on Kit Carson Park on Sunday for the championship round of the 3d San Diego Box Lacrosse League.

More than 350 players competed in the league this year, a record number for the program. Teams were split up by age and region. The divisions were Grades 1-4, Grades 5-6, Grades 7-8, JV and Varsity. The top two seeds in each division met in the championship game.

The varsity division title came down to Poway LC vs. 3d All-Stars. With two Poway teams earning the Nos. 1 and 2 seeds, the league put together an all-star team to battle Poway LC for the varsity championship game.

We sat down with Zack Burke, Director of 3d Lacrosse San Diego, to find out who played well in this year’s championship and to hear how Burke thinks the 3d Box Lacrosse League will impact players in San Diego.

Which players stood out from the All-Star team?

I really thought Jack Rahier, a 2017 midfielder from Patrick Henry stood out during the championship game and all season. His ability to get to the middle of the field and find high-percentage shots gives his team a chance to score whenever he has the ball.

Chase Taylor, a 6-foot-2 monster attack from Great Oak also really stood out. With his size and skill, he is hard to stop. He had a diving backhand goal at the end of the game that really showcased his athleticism.

Blake Amiatu, a midfielder from El Camino, was new to the league this year, but his size and speed was unmatched by any player that I saw. I had never seen Blake play before this fall but was very impressed. That is the cool thing about this league — great players can show up at any time!

What separates the all stars from the rest of the league?

The players that make the all-star team all have a good grasp of how to play the box game. Box lacrosse is not the same game as field lacrosse. If you play field in the box, it is not pretty and really does not help a player get better. So the guys that listened and learned how to play box at practice were the ones who were selected.

Who stood out from the Poway Lacrosse Club team?

Poway LC is really deep. All of the Poway LC players have been playing box for three years, so their understanding of the game is on another level than other teams in the league. Nick Beeson (Bryant), Zach Hodge (Cleveland State), Cole Landolt, Owen Springett (UMBC), Jake Fiske (Bryant) and Brad Belasco (Westminster) really stood out. All of those guys are skilled players and can score at anytime. Belasco was named MVP, and he really took charge of the game. He is a lefty, and there are not a lot of them in the league, so Brad really took advantage of that. He is a senior who lives in the weight room, so it is really tough for younger guys to match up against him.

What do you think box lacrosse has done for players in the 3d Box Lacrosse League?

It is amazing to see how the skill level improves for the guys who come to practice and are open minded about the skills we teach. Playing box the right way means that a lot of players have to change their bad habits and learn new ones. That takes time and attention to detail. The guys that came to practice and really learned have taken their game to the next level. All of these players were exposed to so many different ways to finish the ball that we really saw the ability of the player to finish vs. the goalie one-on-one get a lot better.

The players’ off-ball movement improved as well over the six-week season. A crucial part of offense in field lacrosse is what you are doing when you do not have the ball in your stick. Many offensive players just stand around watching the ball carrier. In box, a player has to keep moving at all times off-ball or their defender can look for quick double teams.

I think we will see the effects of box lacrosse this spring season when we see players from all over the county cutting to the ball at the right time and finishing the ball when they have a chance.

What do you think the effects of playing box lacrosse this fall will be on the style of play in the area?

Our goal with this league is to train the masses. With training locations at the Ecke YMCA in Encinitas, Kit Carson Park in Escondido and the Poway Sportsplex in Poway, we can train hundreds of kids a day throughout the county. We have select teams and have a core of players we work with year-round. This league lets us teach so many more players than just club players.

We hope that this league helps develop a distinct style of play that any college coach can see while watching our players. We want San Diego to be known for its lacrosse skill and IQ. Our commitment to teaching box lacrosse takes a lot of time and patience from a coach’s perspective. We are teaching new philosophies and a style that is totally new to a lot of players. It takes a few weeks to figure it out, so that is why we are so big on practicing.

JV Division
Cathedral LC 13, Poway LC 8
Cathedral was too big and strong for Poway. Justin Clement led the Dons to victory with his physical play and presence.