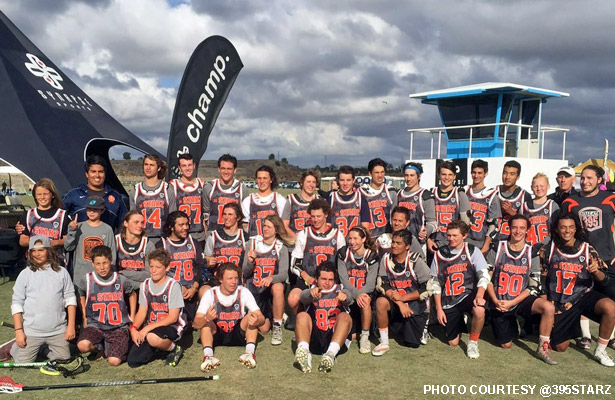 395 Starz Elite won the open division title at Surf Storm last weekend with a 6-4 victory over 3d LA/OC 17 in Sunday’s championship game. The 395 squad earned a berth in the title game by going 5-0 in pool play, including a tough 7-6 win over Black Cat out of Palos Verdes, but coach Paul Morgan still was uncertain heading into the matchup with 3d LA.

“We were definitely feeling like the underdog, being that 3d beat one of our common opponents (Black Cat) by seven and we only beat Black Cat by one,” Morgan said. “Their goals for was 67 compared to our 41 going into the championship game.”

3d LA hadn’t scored fewer than nine goals in any of its first five games and had given up more than two goals only once. But 395 Elite jumped out to a 2-0 lead and never trailed. They led 4-2 at halftime and closed out the game with six different players scoring the team’s six goals. Sophomore Josh Crisler got 395 Starz Elite on the board, and sophomore Blake Amiatu (El Camino), freshman Sean Sanchez (Great Oak), senior John Luna (Valley Center/NCAA D-III Wilkes), sophomore Nathan Chalut (Fallbrook) and freshman Nathan Hoover (Great Oak) also scored.

The 395 Starz squad might not have made it to the title game at all if not for strong play from junior goalie Wesley Wheeler (Fallbrook) on Saturday, Morgan said, especially in the 7-6 win over Black Cat.

“I’m confident that everyone on our team feels that without Wesley this weekend, we would not have been in championship contention,” Morgan said. “He won us the game vs. Black Cat, making multiple one-on-one saves at the most crucial moments and was a huge vocal presence between the pipes that we haven’t had in our program. Against 3d LA/OC, he had 4-5 point-blank, one-on-one saves that could have easily changed the momentum against us.”

Here’s what Coach Morgan had to say about his 395 Starz Elite team after its Surf Storm championship:

“This is really the first year we have had two midfield lines as equal to each other, skill-wise, in our program. Chase Pymm (Temecula Valley), Blake Amiatu (El Camino), Joshua Crisler (Murrieta Mesa), Sean Sanchez (Great Oak) and John Luna (Valley Center) are big, strong and imposing two-way midfielders with excellent vision.

“We got better and more comfortable with all of the talent on our team as the weekend progressed, and it was exciting seeing a very talented group of offensive players work together. We had a lot of assisted goals this weekend, which was great as a coach who is trying to prepare many of them to play collegiate Lacrosse. First-year [395 Starz] players Seth Dignan (Great Oak) and Jason Thibeault (Great Oak) had strong showings, as well, and will continue to improve as they get more comfortable with the system.

“[Freshman] do-it-all shorty Sean Sanchez (Great Oak) had a phenomenal weekend offensively, defensively and in the clearing game. We were down by one to Black Cat with four minutes left, and Sean tallied back-to-back goals, the second one an outside-the-box rip to put us up by one and win the game. Watch out for this freshman from Great Oak.

“Blake Amiatu is just a freak athlete. This kid has size, strength, speed and skill to play at a big-name college. He does everything that is expected of him, and I believe his best comes in situations where he has to be creative to put the ball in the back of the net. He had a behind-the-back, between-his-legs goal that surprised everyone watching. Blake is huge in the clearing game for us and is the quarterback of our offense when he’s out there. He does an outstanding job consistently creating offense for his teammates.

“Louie Fiacco, a sophomore defender from Great Oak, is flying under the radar, but he will no doubt play Division I Lacrosse somewhere. Louie was a varsity starter for Great Oak as a freshman. He led our defense, along with Jake Smith (El Camino), and Jackson Carrasco (Great Oak) who forced numerous turnovers all weekend and shut down essentially every attackman they faced.

“Freshman players who impressed: Matthew Beddow, who lives in the Westview (San Diego) area but attends St. Augustine, has been playing 395 since seventh grade. He had a great weekend on- and off-ball, where he created a lot of turnovers with interceptions and takeaway checks. Matthew is legitimate scoring threat in transition, too. He put the ball top corner on the Braves’ goalie on Saturday that left the crowd stunned. As he grows into his body he will become more imposing than he already is.

“Nathan Hoover played high crease in our offense for a majority of the weekend and had a lot of success. Having an inside finisher who isn’t afraid to get in a ground-ball scrum was a huge asset for us. Nathan has an incredible sense of the ball and positions himself to get his hands free in tight space. Any time there was a ground-ball scrum, Nathan would be the one to come out of it with the ball 70 percent of the time. Nathan is a huge threat whose contributions go unnoticed but are critical to the success of our team. As he continues to mature as a player physically, he will only become a bigger threat.”