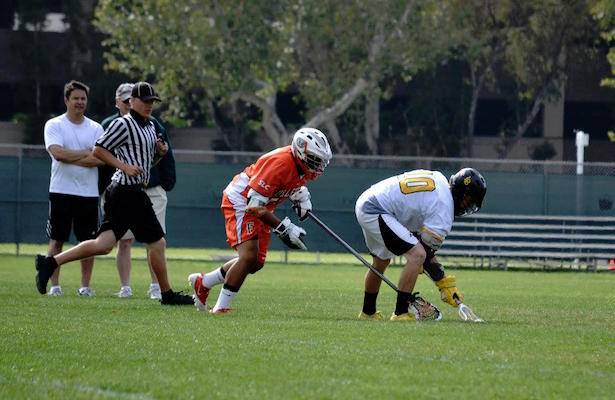 As if you needed another reason to attend Saturday night’s game between Michigan and Delaware, here’s one more. Deron Hansen will become the first the first member of Orange County Lacrosse Officials Association to officiate an NCAA Division 1 lacrosse game when the Wolverines and Blue Hens take the field.

Hansen recognizes that his assignment represents another step forward for Orange County lacrosse: “Having the opportunity to work a division 1 game takes years of experience with high level lacrosse, and until three years ago would have never been possible for a west coast official. Now that we have both the Pacific Coast Shootout and Orange County Winter Invitational in OC West Coast officials finally have the ability to get assigned a Division 1 game.”

Hansen has been a fixture in Orange County lacrosse since he transferred to Cal State Fullerton where he he won a Southwestern Lacrosse Conference Championship in 2009. It’s difficult to measure how fortunate we are to have Hansen in our lacrosse community.

His presence around the lacrosse fields is nearly constant. When he is not calling a game or coaching Esperanza High School (he is entering his sixth year as head coach of the Aztecs), you can often find him behind the camera. If you’ve ever watched a live stream on MaxLaxOC.com or enjoyed one of our team spotlight videos, Hansen has had a hand it. The former Radio, TV, and Film major has either shot it, edited it, coordinated or all of the above. He also trains beginning umpires, has been involved with five different referee organizations, and was a liaison at the Orange County Lacrosse Official Association for two years.

Hansen first started officiating 10 years ago when he was a sophomore in college. Hansen’s former teammate Kyle Morrison (current defensive coordinator at Chapman) suggested that he start officiating as a fun way to earn some extra money and learn more about the game. Hansen says “My initial training and certification took place in San Diego. San Diego has some of the best trainers and evaluators on the West Coast, and I was able to bring their knowledge with me to the OCLOA when I moved to Orange County in 2008.”

Hansen estimates that he has close to 2,000 games under his belt, all the way from youth to college. His experience, qualifications, and reputation have earned him the opportunity to work the past three MCLA National Championship Tournaments, the 2014 MCLA Division 2 Championship game, and as a crew chief for NCAA Division 3 games.

Now that he has reached the top of his profession, Hansen is quick to acknowledge those who have helped him along the way “I couldn’t be more honored to have the opportunity to represent our organzation and west coast officiating. I would like to thank Juarez Newsome, John Bistowski, Johnny Walker, Frank Lynch, Dan Coronel, Woody Josseslyn and Bob Duggan for all of the mentoring over the years to help me reach this point in my officiating career.”

Tickets for the Orange County Winter Invitational are still available. You can buy them on line by clicking on the image below.