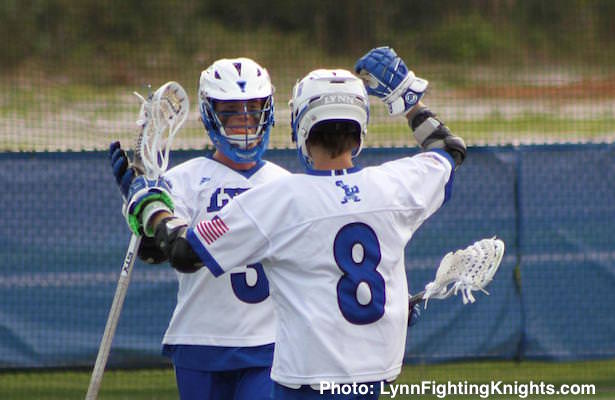 It was another big week for San Diego bred lacrosse players in the NCAA.

Lynn junior Johnny Gavin (La Costa Canyon) scored two goals to lead the Fighting Knights to a 15-6 win over Shorter.  Gavin is No. 3 in the picture above.

Tristan Ruh (Pacific Ridge) collected his first point as a Boston University Terrier with an assist on a goal by Greg Farris. The Terriers defeated UMass Lowell 8-5.

Cam Ziegler (La Costa Canyon) and Ryan Sharpe (La Costa Canyon) continued to compile points in the early season.  Ziegler scored three points (2 goals and an assist) and Sharpe added a goal, but it was not enough as Bryant was edged by Bucknell 11-1o.  Kyle Mummau (La Costa Canyon) started at defense for Bryant and was credited with a groundball.

Wagner sophomore Spencer Beyer (Carlsbad) scored one goal, burying the Seahawks’ first tally of the season five minutes into the game against Manhattan. Wagner won by a score of 16-5.