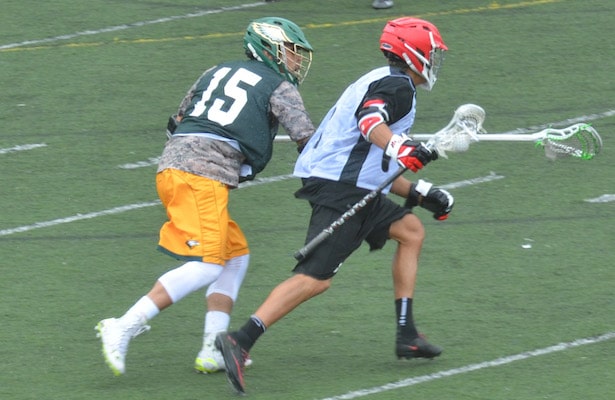 Chapman University and Concordia University began their 2016 quests for national championships with an exhibition game at Tesoro High School on Sunday. The game was the feature event of a full day of high school and college lacrosse action. The Panthers ranked no. 4 in the Men’s Collegiate Lacrosse Association Division 1 preseason poll hope to return to the Final Four for the third consecutive year, and win the first rings in program history. The Eagles, ranked no. 2 in the MCLA Division 2 pre-season poll, are equally optimistic. The game gave local lacrosse fans an early season opportunity to watch some high quality MCLA action.

Sunday’s wet and wild weather did not stop lacrosse enthusiasts from watching and participating in the fast-paced, closely contested match. The Panthers pounced on the scoring early but the Eagles screamed right back to tie the game at 1-1. The teams continued to trade blows throughout the first half with a late Concordia goal knotting the score at 3-3 just before halftime.

Led by two goals from Wesley Greason, the Panthers jumped out to a 7-3 lead to open the second half. Greason’s sweet top shelf laser from the right side was one of the highlights of the afternoon. Concordia staged a comeback by scoring two of their own but it was too little, too late for the Eagles. The Panthers went home with a 7-5 victory.

The other games of the day pitted local Southern California teams Buku, Nighthawks, Wave and Titans in a series of matches. The last game of the soggy afternoon pitted Buku against the Titans, both undefeated in their earlier games. The Titans’ opened the scoring and fought off a penalty before Buku scored to tie up the game 1-1. Titans scored next and found themselves in a back and forth battle but in the end remained on top 6-3, Titans over Buku.

Thanks to everyone who participated and attended!